ALL ABOUT ASTROLOGY CHARTS

Astrologers say astrology gives insight into your character, what careers will appeal to you, your relationship to others, and areas of strength and weakness.

They say it helps you understand events in the past and prepare for stressful times in the future.

And that it helps you identify the calling of your soul and challenges for your spiritual growth.

But exactly HOW do astrologers reveal all of these amazing insights?

They read your birth chart, of course!

So what exactly is this chart-thingy? And how can it possibly reveal the secrets of life, the universe, and everything?

Keep reading, and find out for yourself…

What exactly is an astrology birth chart?

There’s actually no supernatural magic to making an astrology chart. It’s basic astronomy (Yes, astrology invented astronomy so we could make charts. Everyone, deal with it.)

An astrology chart is just a map of where the planets are in the sky at a particular moment in time, as viewed from a specific place on Earth.

That’s it! Making a chart just requires observation and mathematics.

(What we do with a chart is a different matter. We’ll talk about it in a bit…)

Okay, so what does an astrology chart have to do with my Zodiac sign or my horoscope?

If I asked: “Hey baby, what’s your sign?” chances are you know the answer.

In fact, you’ve probably been sneaking a look at your horoscope for years. For entertainment if nothing else. (You can admit it, we’re all friends here.)

Now you know your sign because they’re really easy to look up. All you need to know is your birthday.

…Spring babies are born when the Sun is in Aries, Taurus, and Gemini,

…Summer babes have the Sun in Cancer, Leo, and Virgo,

…and Winter babies are Capricorn, Aquarius, and Pisces.

Or, in more technical terms, Zodiac Signs in Western astrology are a way to describe where the Sun was located on the day you were born with respect to the seasons.

Since the Earth travels around the Sun through the year, the Sun appears to shift against the background of stars in a predictable pattern. We call its path through our skies the Ecliptic (because it’s also where eclipses happen). 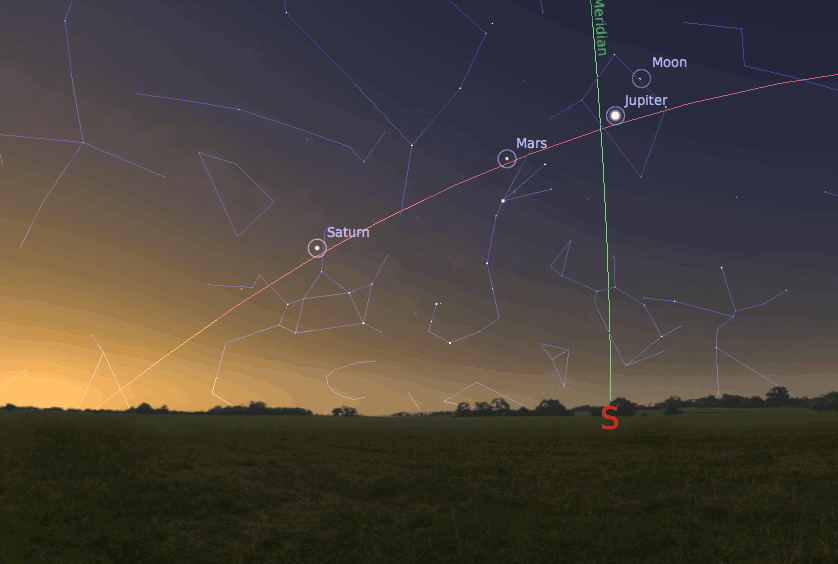 Ecliptic in pre-dawn sky over Austin, Texas, on Feb. 7, 2018, with Sun, Moon, Mars, Jupiter, and Saturn. Image courtesy of Stellarium.org

Thanks to the Babylonians, we measure the distance around the Ecliptic belt in 360 degrees. Zodiac signs are just 12 30-degree divisions of this circle, beginning with the Spring Equinox.

Of course, you already know there’s more stuff out there besides the Sun – the Moon, Venus, Mars, and all the other planets.

Since all of the planets circle around the Sun on the same flat disk as the Earth, they also appear to travel across our earthly skies along the Ecliptic belt.

And voila! An astrology chart is just a quick way to locate ALL of these extra bits, and the Zodiac is just the main coordinate system we use.

Today charts in Western astrology are usually circular, just like the sky. The ecliptic forms the circle, with Zodiac signs and planets marked around the circumference.

We draw these circular charts with South at the top and North at the bottom, East on the left and West on the right. That’s because in the Northern hemisphere, when you look toward the Sun at midday, you are facing SOUTH. 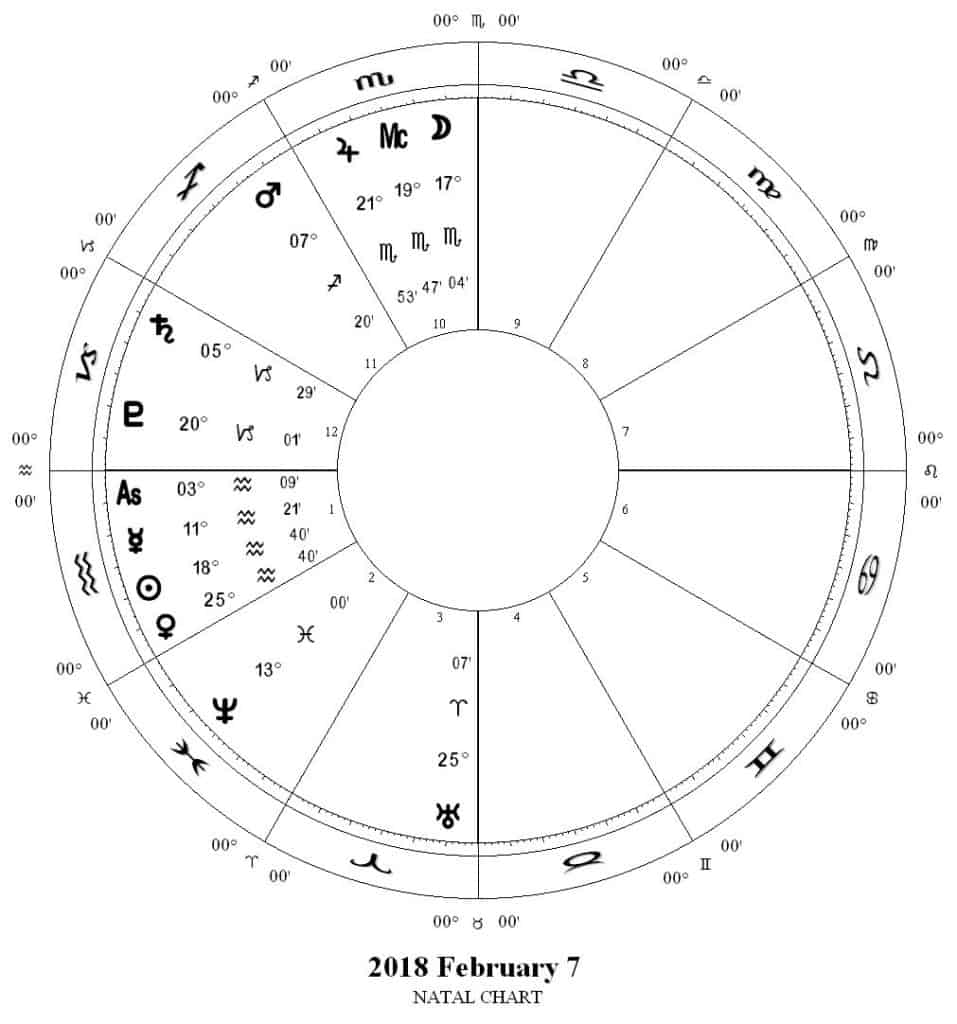 This chart also represents the same pre-dawn sky on Feb. 7, 2018, from Austin, Texas, as pictured above. You can see symbols for the Moon and Jupiter at the top of the chart, just like they are in the sky. Image courtesy of Cosmic Patterns Software.

Yes, this means if you were born in the Northern hemisphere, you can print out your birth chart, hold it up in front of you, turn and face south, and you can literally see where all of the planets

were in the sky from when and where you were born.  (Go ahead, try it, you know you want to…)

(By the way, this isn’t the only way to make a chart. In fact, before the 1800s, charts were more often drawn as squares. That’s because square charts are a little easier to draw by hand. Now you’ll remember why astrologers today still refer to the “angles” of a chart because they actually used to have angles.) 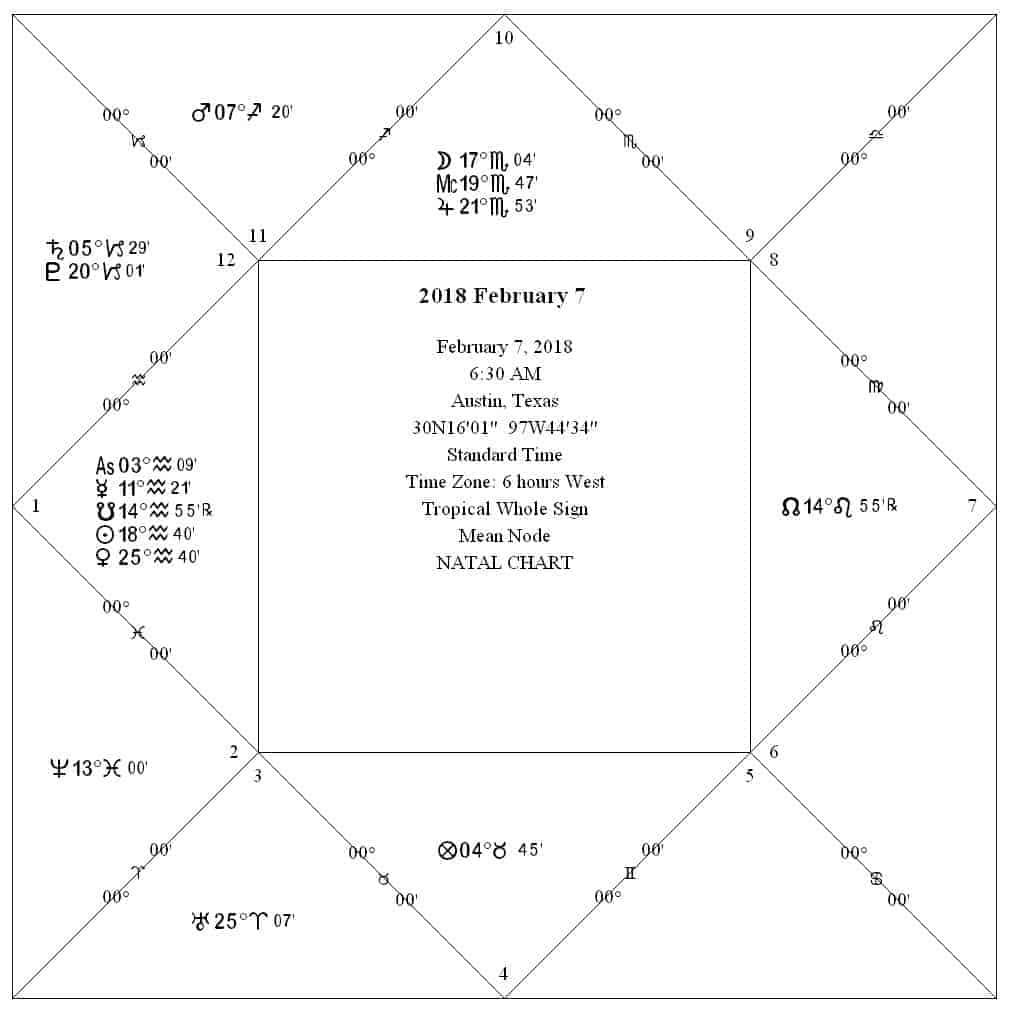 This is the same chart as above, in a square chart format. Image courtesy of Cosmic Patterns Software.

In addition to planets and Zodiac signs, astrologers add a few extra factors to charts for quick reference.

Astrologers also like to look at the relationship between the positions of different planets. We call these aspects and highlight certain ones by drawing lines between planets on the chart.

We also use charts to describe the relationship between the planet and the horizon line. We call these Houses in astrology.

For example, saying the “The Moon is in the 7th House” just means that the Moon is setting on the Western horizon. It does so it once a day.

All of these factors are based on observations and math. We’re still talking technology, not magic…

How are astrology charts made?

(This section is for the tech-savvy, historically curious, or folks who just want to score points at parties by explaining how cool astrology is. If this isn’t you, go ahead and skip to the next section.)

Because they are always moving, finding the precise position of the planets in our sky isn’t easy.

Today, sure, there’s an app for that… but once upon a time it was a technological revolution to be able to predict where planets would appear at a given place and time. In fact, the pursuit of planets has been driving innovation for millennia.

Our ancestors spent a lot of time and energy studying the skies. They built stone circles and pyramid observatories to track the movements of the Moon, Sun and planets. They needed to tell time so they knew when to plant crops, if nothing else. 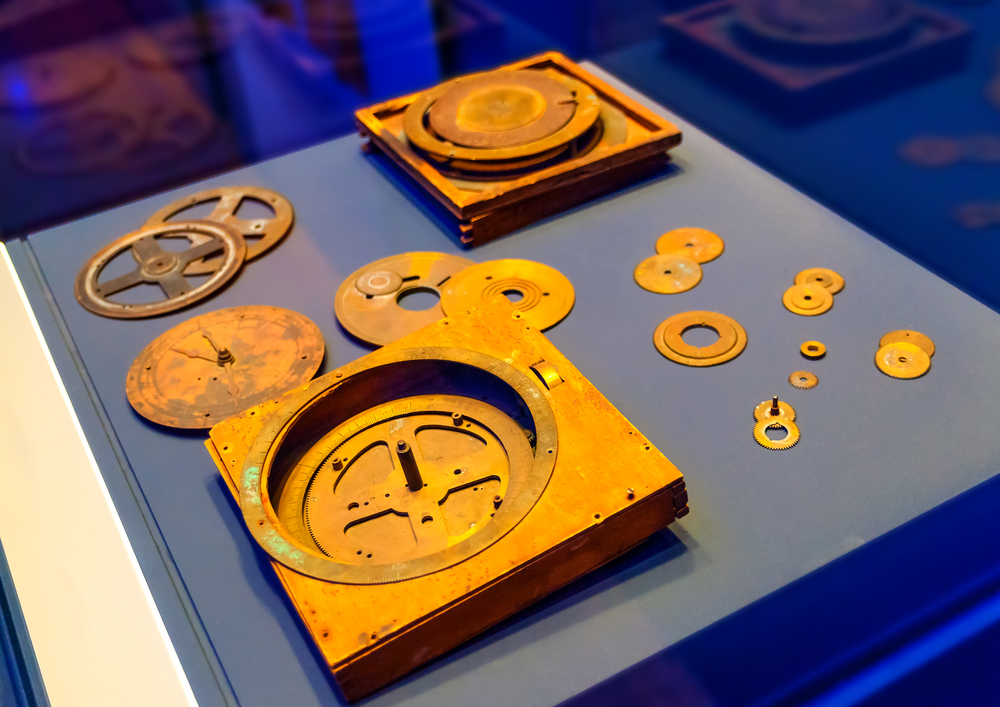 Reconstruction of the Antikythera Mechanism. Image courtesy of Shutterstock.

The classical Greeks created sophisticated instruments to keep track of the planetary cycles with great accuracy. One such device – called the Antikythera Mechanism – was a kind of early smartphone.

In the Middle Ages, sophisticated astrologers used an Astrolabe. You could point the astrolabe to a planet in the sky and use the markings on the edges to know where it was positioned.

Medieval and Renaissance astrologers also penned books with tables for planetary positions. These “ephemerides” and an atlas of local time in different cities are required to construct an accurate chart by hand.

And, believe it or not, those same astrology tables and atlases were even used by modern-day programmers to design the clocks that run your computer, smartphone, and Internet.

(Okay, digression over. But you can be proud to be an astrologer, because astrology has always inspired some awesome inventions.)

So, where does the MEANING in astrology come from?

NOW, we’re finally at the point where astrologers and astronomers part company.

See, astronomy is satisfied by being able to measure things and plot them on maps. Perhaps even figure out the physical patterns and mechanisms behind them.  All interesting stuff of course.

Astrologers, of course, take it one step further. They ask: “Okay, cool and all, but what does it MEAN?  What’s my place in this cosmos?”

In other words, astronomers confine their studies to the physical. Astrologers examine the interplay between the physical and the metaphysical – they embrace a holistic worldview.

See, most astrologers believe that we live – and participate – in a conscious universe. Or at least, a universe with which we’re having a conversation.

And that by observing the cosmos “out there”… we find insight into our internal experiences.

That’s the “magic” part of astrology. Carl Jung called it synchronicity – that two events connected in time may also share other meaningful connections. Not because one event causes another, but because both events are an expression of a deeper, underlying unity of existence.

For astrologers, we look at the sky and how the planets appear to us during moments in time. It’s one way the cosmos is “speaking” at that moment…

(It’s also where the word astrology comes from – Astro means star, and logos is speech, writing, or logic.)

An astrology chart, then, is a kind of portable sky. A snapshot of a single moment.

Once you understand what each piece looks like, it’s easy to build a vocabulary for what you see might represent in the context of your experience, and your questions about life, the universe, and everything…

Though you can pay an astrologer to “translate” this star language for you… if you’re really looking for meaning, there’s no substitute for learning the language yourself.

Because then you are participating in the Cosmic conversation for yourself… directly and without filters. You can see for yourself what works and doesn’t work for YOU.

At the opening of this article, I wrote, “Keep reading, and find out for yourself…”

For that is what astrology charts are for, to discover and get to know yourself!