BEYOND THE HOROSCOPE: ALL ABOUT THE PLANETS

Our primal selves echo with the ancient wisdom: To move is to be alive. To feel desire. To have soul…

As the Earth turns, the Sun rises in the east and sets in the west, creating the endless cycle of day and night.

The changeable Moon waxes and wanes, pulling at the tides and our hearts.

And at night we see five other lights traveling across the background of stars. The Greeks called these aster planetes, or "wandering stars" – which is where we get our English word planet.

It’s our fascination with these seven moving lights that gave birth to a “science of light” – astrology.

The Seven Visible Planets in Astrology

The seven wanderers included the Sun and the Moon, plus the Starry planets Mercury, Venus, Mars, Jupiter, and Saturn.

Their appearance in the heavens inspired astrologer-shamans and the first astral omens.

They took a planet's appearance – it's color and how it moves -- as a sign of what it wanted -- its end, purpose, or what it is moving toward, what Aristotle called its telos.

Planets represent what it means to be alive and interacting in the world. How we act and react, grow and develop. Each of the seven visible planets claimed a realm of experience, around which we built a complex metaphysical vision that endures even today.

The Greek philosopher Plato was one of the first to capture the ancient worldview. In the Myth of Er, he described planets as the cosmic mediators. Straddling the divine and the terrestrial, the planets “clothed” our souls in the fabric of time and space.

A complex system of correspondences emerged between planets and the stuff of our lives. We still have seven days of the week, seven heavens, seven deadly sins, seven archangels, seven notes on a musical scale, seven chakras, and more, all thanks to the seven visible planets.

These seven planets also formed the basis of the astrological model. Zodiac signs, aspects, and houses are all variations of the planet themes.

Astrology’s also a root language of Qabala, Alchemy, and Tarot. And it lies at the heart of traditional Western, Chinese and Ayurvedic medicine.

For more than 2,500 years, we believed we held the secret keys to the pattern of creation itself.

What if we could understand – and adopt – the logic of the heavens, we’d become happier, healthier, even more, spiritual and star-like.

Imagine the shock when we discovered new planets… 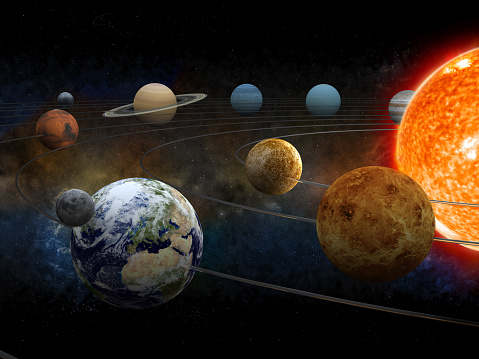 When Galileo pointed his telescope at Jupiter and discovered moons revolving around it, we knew once and for all that the Earth isn’t the center of the cosmos…

Now we’ve been to the Moon and back, sent spacecraft to visit the planets, and peered across the solar system and far beyond.

As citizens of this modern cosmos, we obviously have a much broader understanding of the physical mechanisms of our solar neighborhood than our astrologer ancestors.

After the telescope’s invention some 400 years ago, humans quickly realized that there were more things in the heavens than we ever imagined.

Once we discovered Uranus, the hunt for more “new planets” was on. Soon Neptune and dozens of asteroids, including Ceres, Vesta, Juno, and Pallas, followed.

Of course, astrologers debated ways to fit these newcomers into the astrological model.  Nineteenth-century Theosophists asserted that, in a perfect, enlightened system, we’d find 12 planets, one to govern each Zodiac sign.

But we got way more than we bargained for… Since the launch of space-based telescopes and the advent of computer-controlled ground-based telescope networks, our awareness of our solar system neighborhood has exploded.

Pluto was "demoted" as a major planet in 2006 by the International Astronomers Union after it was discovered that Pluto was only one of a larger class of trans-Neptunian objects (TNOs) in the outer solar system, known as the Kuiper Belt and the Oort cloud.

So far more than 20 TNOs have been identified and given evocative names such as Logos, Chaos, Orcus, Rhadamanthus, Deucalion, Haumea, Praamzius, Typhon, and Eris. And that’s just the start; scientists suspect maybe 300 to 10,000 more.

There are at least one million asteroids in the asteroid belt between Mars and Jupiter, including 625,000 designated by number, of which more than 40,000 have been named.

So many new planets are being discovered now, the Minor Planet Center has developed a few naming conventions. Depending on their qualities, new discoveries receive the names of creation deities, underworld gods, centaurs, or heroes of the Trojan war.

So how are astrologers working with all these new planets? How do we manage tens of thousands of bits of data? What new challenges and possibilities do they bring? What could they “mean” for us?

And so, a new “golden age” of astrology is just beginning…

On the one hand, astrologer-historians have been quietly researching our ancient roots. They’ve been learning Greek and Latin, Arabic, Sumerian, and Sanskrit. They search archives for original documents to understand not just how cultures have studied the heavens, but why they did.

They’re learning how our concepts about astrology have shaped not just our technology, but how we think about the world and our place in it.

Today, we know more about where astrology came from than we have for centuries…

On the other hand, other astrologers are also embracing the evolving vision of our cosmic neighborhood.

We’ll devise new charting techniques to be able to make sense of all the information – dials and harmonics and 3-D virtual reality projections and even more we haven’t even thought of yet.

Big data technology, artificial intelligence, and crowd-sourcing will create whole new ways of understanding astrology and how our solar system neighbors affect us.

As these two streams weave together, new 21st-century astrology is emerging – one that recalls its heritage as holistic “spirit science” in which matter, energy, and thought are not the separate things we assume them to be…

And, as our society grows up and reimagines the cosmos as a living whole – perhaps astrology to re-enter the conversation once again.