What if you could experience peace and calm in the midst of the holiday season?

Sounds impossible, doesn’t it? It’s not. This time of year has a moment that has been cosmically engineered for precisely that. And simple, ancient traditions are the pathway.

That moment is the Winter Solstice.

In both hemispheres, the day comes with the sensation that time has stopped — which is exactly the meaning of the word “solstice” — a mashup of the Latin for “Sun” (Sol) and “standing still” (sistere). 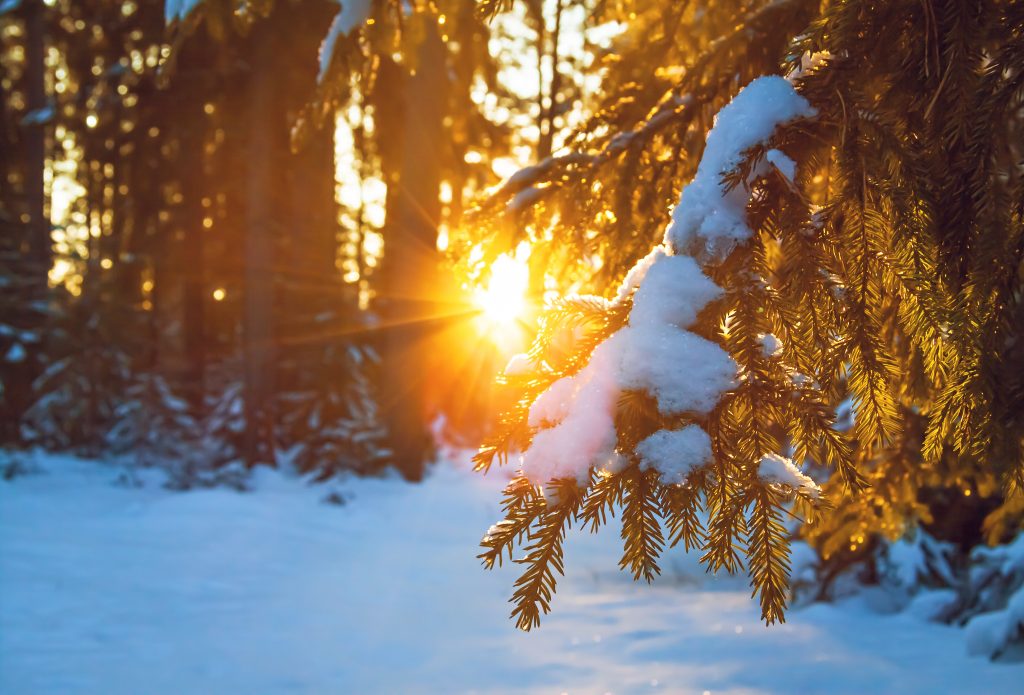 Solstice Rituals for Peace and Calm

This stillpoint has inspired traditions throughout the globe and history. From the ancient Celts to Persia to Rome, with Yule logs to Menorahs, humans have used fire and light to celebrate the Sun. Winter customs encourage the light to return, while the summer honors its fullness.

Wherever you are, you can draw on these ancient impulses to experience stillness and celebrate the light.

Here are some ideas for creating your own Solstice ritual, by yourself or with friends.

The simplest one you can do by yourself, and spur of the moment, too:

Light a candle and gaze quietly into it for a few minutes. Allow your mind to relax and grow still. See the light in the center of your body, with the flame growing bigger and bigger. Imagine that its warmth is permeating your being.

To share the light, see it spreading into the room. Then the building. Your neighborhood. The world.

When you feel complete, put out the candle.

(Ideally, to respect the flame, don’t blow it out. Instead, pinch it (if you act quickly) or use a candle snuffer.) 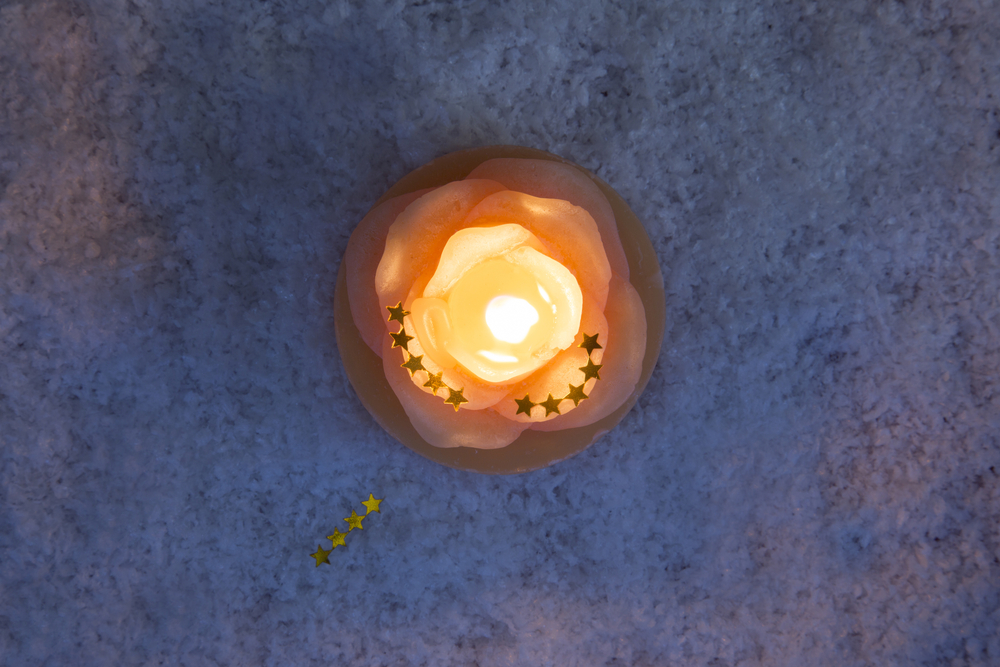 If you’d like to make your ritual more of an event, create an altar to serve as the platform and point of focus for your ritual. This can be simple or elaborate; your choice.

First, set the altar’s parameters. Lay down a cloth out of material you like – a scarf, a throw, a shawl.

Invite the four elements to join you by adding a glass or chalice with water, a candle, a crystal and incense.

Add seasonal touches. For the winter Solstice, red and green (a sprig of holly with berries, a poinsettia) to symbolize life. For the Summer Solstice, fresh flowers and produce to represent the bounty of the season.

Feel free to include small items of meaning to you – a fairy or goddess figurine, Tarot cards that speak to you (consider the Sun, or Strength or Judgment), a totemic object. 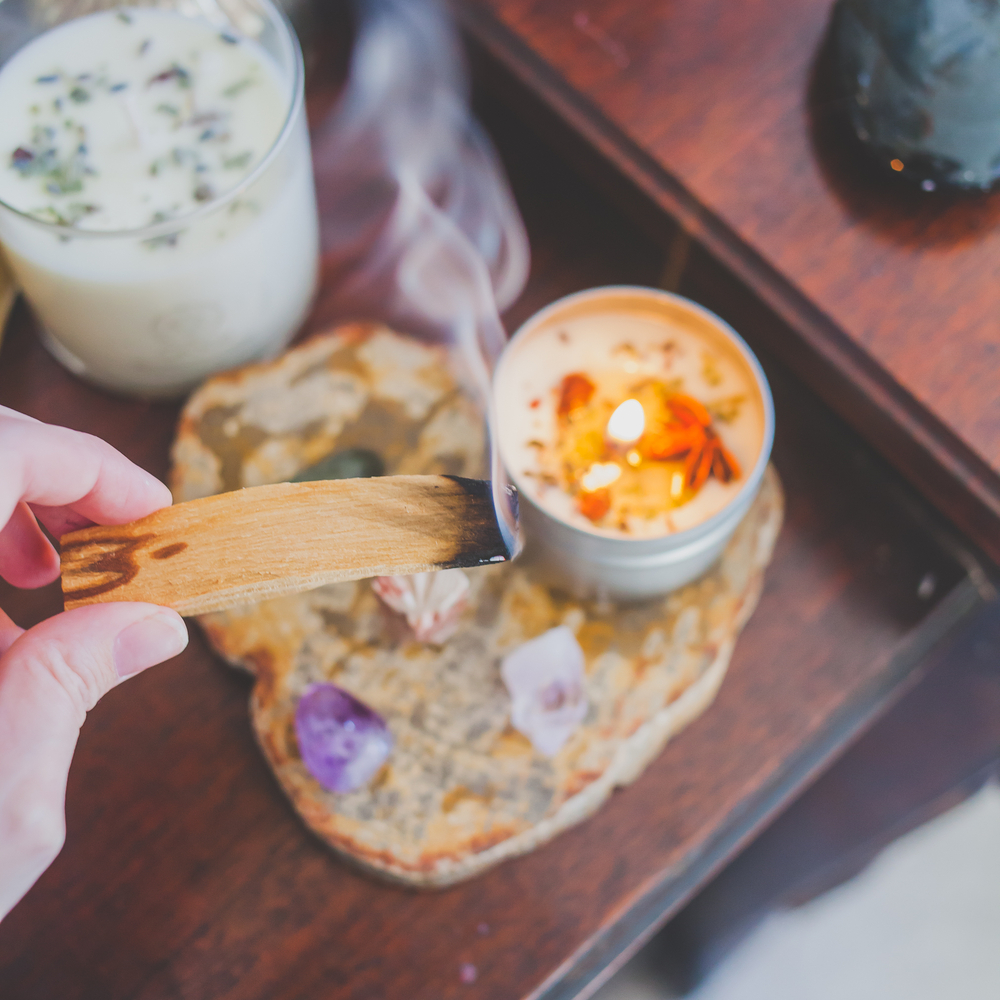 If you’re celebrating the Winter Solstice, turn the lights low or out and light a candle.

If you’re celebrating the Summer Solstice, hold your ritual outdoors, during daylight hours if possible.

Light a candle to represent the Sun, even if it’s in the sky. Sit or stand in the stillness and contemplate the candlelight.

(You can cast a circle if you know how to do that, but it’s not necessary.)

To burn away the old and make space for new energy, use a burning bowl. (You can do this with or without an altar.)

A burning bowl is often associated with New Year’s Eve. Still, its symbolic magic fits the astrological symbolism of the Solstice: the Sun leaving the fire of Sagittarius behind for the starkness of Capricorn.

Use a heat-resistant bowl. All the better if it’s ceramic; bonus points if handmade.

You’ll need a pen or pencil and three pieces of paper:

Stand by the bowl until all the papers burn to cinder. Dispose of them mindfully.

You can do this alone or in a group. If you have a burning bowl with friends, decide whether each person is going to burn all of her papers before the next person does, or whether you will go around the group, with everyone burning their first sheet, and then everyone burning their second, and then the third. (You may find the latter method more effective because it takes the group as a whole from one stage to the next.)

Have you ever attended a candlelight church service? Seeing the light grow and grow through the pews is magical. Borrow that magic for the Solstice.

Create a sacred space or altar if you like. Each person can place an object or two of meaning on it. Or skip this step and simply stand together.

Place a large candle in the center of the group. Hand out smaller candles (votives or tapers) so that each person has one.

Invite members of the group to stand in a circle.

If you are indoors (in the Northern Hemisphere), dim the lights or turn them out.

Light the center candle. Have each person light their candle from that.

Enjoy the silence as the light spreads. Enjoy the light. Then see the light expand through the room, the neighborhood, the town, the country, and the world. 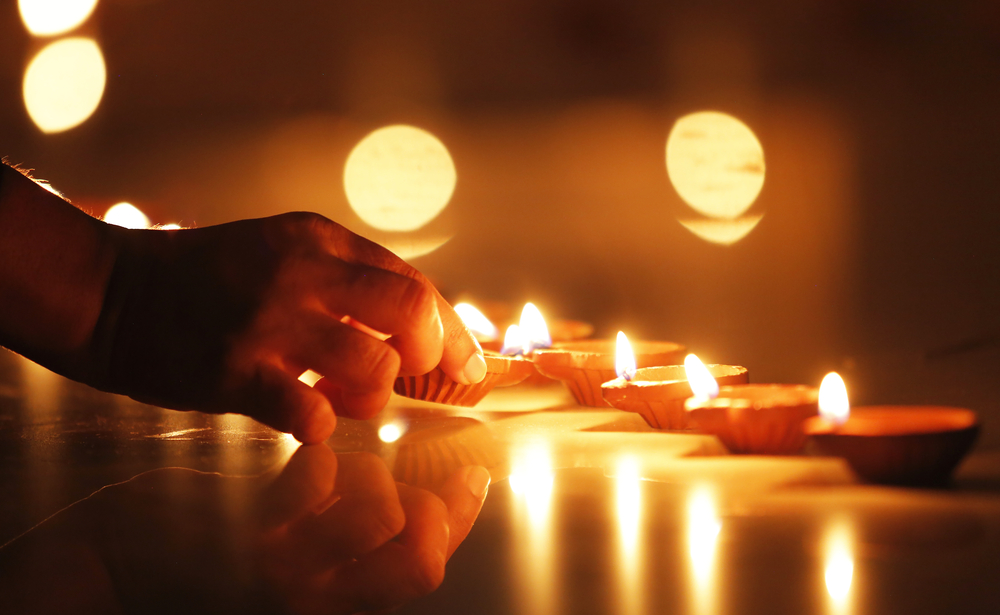 Variation for the Summer Solstice: Build a fire outdoors, in a pit or a bowl, whatever is safe.

Have the group circle the fire. Feel a flame ignite in the center of your being. Allow the warmth to permeate you. Let the light spread to and fill the circle. Then see the light expand through the neighborhood, the town, the country and the world.

The Solstice is the ideal date – after dark, if you’re celebrating winter or while the sun is still up for the summer. If that doesn’t fit your schedule, the night before or within two days after is also appropriate.