Repeat after me three times:

“The signs in the astrological zodiac are NOT the same as the astronomical constellations.”

What does this mean for you?

That, no matter what the astronomers say, your astrological Sun sign never changes.

So, why does this story about changes to Zodiac signs (or its cousin about the 13th sign) keep popping up? (Like this recent version on Spirit Science.)

The word zodiac refers to the circular band of the sky that the Sun appears to travel throughout the year as the Earth revolves around it. It originates from a Greek word meaning “life” or “way of life.”

But there are different ways to measure this band, with other starting points or divisions.

In fact, we use three ways of describing the Zodiac: the constellations, the tropical zodiac, and the sidereal zodiac.

In this case, the astronomers refer to the constellations that fall across the zodiacal band, also called the ecliptic.  These constellation boundaries are uneven and defined by the International Astronomical Union (the same folks who demoted Pluto to dwarf planet).

In 2011, astronomers—scientists who study the stars—started referring to 13 zodiac constellations, including Ophiuchus, in this zodiac. (Some systems also include the constellation Cetus as a 14th sign.)

There are two astrological zodiacs: the tropical and the sidereal.

Both of these Zodiacs measure the ecliptic with 12 equal 30-degree divisions on the 360-degree circle. That’s why there have always been—and will always be—only 12 astrological zodiac signs. It’s just very convenient math and of symbolic importance.

These two zodiacs are identical, except for their starting points:

Currently, this means the tropical zodiac starts 24 degrees later than the sidereal zodiac.

Or, to put it another way, this means all tropical zodiac signs must be “backed up” 24 degrees to get a sidereal equivalent. For example, 0 degrees of Aries in the tropical zodiac would become 6 degrees Pisces in the sidereal Zodiac.

Now, the word “tropical” may evoke images of beautiful blue water and sandy beaches. But the word originally comes from ancient Greek words that mean “to turn” or a “turning point.” 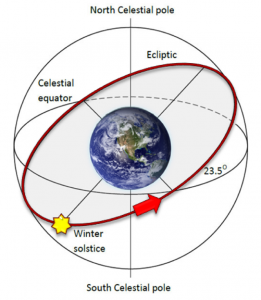 In essence, your Western astrology sign measures how long after the Spring Equinox you were born.

A little background: our Earth tilts 23 1/2 degrees on its axis. So, as our planet orbits the Sun, the latitude where the Sun appears directly overhead changes throughout the year. These changes mark our four seasons.

And the tropical zodiac measures the seasons from the point of view of the northern hemisphere:

• 0 degrees Aries is the Vernal Equinox, the beginning of Spring. The Sun appears over the equator.

• 0 degrees Cancer is the Summer Solstice. On this day, the Sun is at its highest point in the sky (and there are 24 hours of daylight at the north pole).

• 0 degrees Libra is the Autumnal Equinox, the beginning of Fall. Once again, the Sun is now over the equator.

• 0 degrees Capricorn is the Winter Solstice. On this day, the Sun appears at its lowest in the sky (and from the north pole, you can’t see it at all).

Each of the 12 tropical zodiac signs stretches 30 degrees or 1/12 of a 360-degree circle. It takes precisely one year for the Sun to appear to travel through all 360 degrees.

Why the difference in the Zodiacs?

So why is there a 24-degree difference in these two astrological zodiacs?

Well, the Earth wobbles on its axis. Over time, the location of the Sun at the spring equinox precesses (moves clockwise) against the background stars about 1 degree every 72 years.

This “precession of the equinoxes” is what astronomers attempt to adjust for when they “redefine” the zodiac. They are confusing the zodiacal constellations with the astrological signs named after them.

You see, around 2,500 years ago, when our practice of astrology was being “invented” by the Hellenistic Greeks, the Sun could be found within the constellation Aries when Spring began.

An early Greek astrologer, Hipparchus of Nicea (190-120 BCE), coined the phrase “The First Point of Aries” to mark this starting point for the spring season.

(Ironically, it was less than 100 years after his death before the “First Point of Aries” had moved to Pisces.)

But the name “The Aries Point” was never changed. Even astronomers still use the term Aries Point to describe the starting place of their own measurement system around the celestial equator (called right ascension), where the Sun is located on the first day of spring.

Western tropical astrologers will still be using the term Aries Point in 2597 when the Sun will be found in the astronomical constellation of Aquarius on the first day of Spring.

Why are the Astronomers so Confused?

So, why do astronomers keep trying to redefine the astrological zodiac?

Well, astronomers aren’t stupid. They are aware of the differences between the constellations and measurements along the ecliptic (they're pretty good at measuring things).

But, unfortunately, most astronomers have never taken the time to research what astrologers are doing and why. (And they seem to forget that astrologers invented astronomy, just like the alchemists invented chemistry.)

Alas, criticizing something you know little about doesn’t usually work well. There are, of course, plenty of things science could blame astrology for, but this subject isn’t one of them. It just makes astronomers sound ignorant.

And some of the astronomers probably do it because it’s a chance to get some press for astronomy. But, in a way, astrologers should be grateful—each time the topic gets brought up, it gives astrologers a chance to set the record straight!