While I was working on Astrology Hub's Full Moon in Scorpio article last week, I was struck by a factoid shared by astrologer Jamie Partridge:

“Five retrogrades occurring at once is rare, occurring only 4 percent of the time.”

I was intrigued. Certainly, as any astrologer knows, we don't see this many retrogrades happening at the same time very often.

But, I wondered, exactly how often it does happen? And what might it mean for us?

Before we can explore the question together, you'll have to understand what a retrograde actually is.

We all know the planets revolve around the Sun.  Planets with orbits closer to the Sun have a shorter distance to travel; therefore they routinely “lap” the outer planets.

(Click Astrology Hub's Free Gift offer when it pops up to watch the Mars retrograde video for a visual explanation.)

So, a retrograde is simply the illusion created when a planet closer to the Sun catches up to, and passes, a planet further from the Sun.

(In fact, retrogrades can be seen from every other planet in the solar system as well. In fact, for someone living on Mercury, something is always retrograde, which explains a lot.)

Viewed from Earth, retrogrades occur when the other planets are at their closest point in their orbit to the Earth — otherwise known as “perigee.”

For planets with orbits inside of the Earth's — that means Mercury and Venus — they appear to retrograde when they are aligned between the Earth and the Sun.

For all of the other planets, retrogrades happen when the Earth is in the middle — Sun on one side, planet on the other. Or in other words, the planet is opposite the Sun.

So, what does it take to see multiple planets retrograde at once?

In the case of the planets beyond the orbit of the Earth, they need to be grouped in the same part of the Zodiac, in order for their retrogrades happen at a similar time during the year.

Lucky us, it just so happens that for the last 85 years, the slowest-moving planets Uranus, Neptune and Pluto have stayed within a 120 degrees of each other in the Zodiac.

Therefore, every year the retrograde dates for Uranus, Neptune and Pluto have overlapped. And when they do, we've had at least three retrogrades occurring at once.

(To learn more about the long-term cycles of the outer planets in history, check out Richard Tarnas' work Cosmos and Psyche.)

But wait, there's more. Jupiter and Saturn creeping toward the same part of the sky as the outer planets. 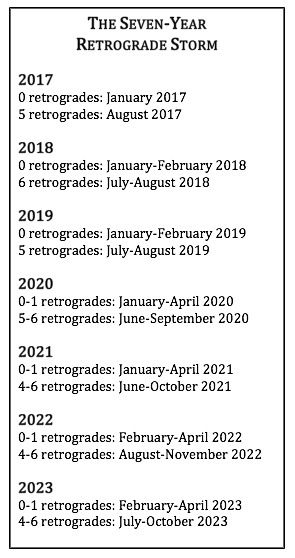 That means that each year over the next seven years, we'll have two or three months during which all FIVE of these planets will be retrograding at more or less the same time.

And, if at any time during their collective retrograde Mercury, Venus or Mars joins them, we end up with six or seven retrograde planets simultaneously.

Conversely, we'll also have stretches of the year in which NONE of these five planets are retrograde. If Mercury, Venus or Mars isn't retrograding, we'll go for several months with NO retrograde planets.

So, what's this mean for me?

You see, in Nature, growth isn't linear, and it isn't constant. The natural rhythm of life is closer to the maxim: “two steps forward, one step back.”

Retrograde planets remind us of this dynamic. We move forward, but then we need time to contemplate, and make adjustments, before for the next round of forward motion.

Retrogrades pull our energies inward. The makes space for more awareness to enter the equation.

Usually planets take turns going though a retrograde cycle. Astrologers consider having 1-3 planets retrograde at any give time just “business as usual.” Each planet gets a turn to have its affairs up for review and reconsideration.

But as we enter an “all or nothing” phase, things may feel harder to manage for the human kingdom.

Rather than riding our cosmic cycle up and down gently rolling hills, the terrain becomes rugged. Think deep descents we fly down at breakneck speed, followed by steep climbs pedalling hard to get to the top.

How we adapt to climate change seems an apt metaphor. As weather patterns shift, many places are likely to experience longer periods of drought, punctuated by more intense storms.

Take my home state of Texas, for example. In the past year, we've ended a multi-year drought with three statewide 10-20 inch deluge events. Planners must consider new ways to manage water in the coming years to handle these kinds of extremes.

How often does this happen?

(If you were born during one of these time periods, you can check to see how many retrogrades there were at the time you were born. Just pick up an ephemeris, or order a chart from our online astrology report service).

As Uranus and Neptune begin to pull away from Pluto, the effect will  lessen in intensity in coming cycles.

We're still here. But hopefully each time through we are collectively wiser for the journey.

[Post Update: For those who want to dive more deeply into this phenomenon, astrological researcher David Cochrane has produced a new training video on how to identify these retrograde periods.]