Awareness of addictive behavior has filled our consciousness in recent years. The news tells stories of Hollywood celebs, media moguls, and everyday people checking into rehab at alarming rates.

Has the stress of everyday life turned us toward chemical and other dependencies? Or has the cosmic currents of Neptune in Pisces lain bare our true, addictive natures?

As an astrologer and former administrator for an out-patient drug/alcohol treatment center, I’ve had a fascination with who becomes a full-blown addict versus someone who, caught up in life’s rollercoaster highs and lows, finds comfort where they can.

Is this an issue that astrology can illuminate?

To clarify my questioning, I first explored how we define addiction.

According to the Webster’s Dictionary:

Addiction is the “compulsive need for and use of a habit-forming substance (as heroin, nicotine, or alcohol) characterized by tolerance and by well-defined physiological symptoms upon withdrawal; broadly: persistent compulsive use of a substance known by the user to be harmful.”

Often we associate addictive behavior with other mental health issues, such as depression or bipolar disorder. However, any of us may lean toward addiction as a result of life’s challenges. Some are victims of trauma or abuse; others have a genetic disposition toward habitual behaviors.

I’ve also noticed many addictions result from a fear-based mentality, with anxiety (fueled by a racing mind) playing a key role. An individual may feel a need to run away from something in their lives. They may be running from responsibilities, family issues, health problems, or loneliness, to name a few.

Addictions are, therefore, an attempt to soothe the mind. This “self-medication” may come in the form of drugs and alcohol. But almost any activity can become addictive when used to fill an inner yearning that stems from a deep sense of emptiness or avoidance. Common examples are sex, pornography, food, shopping, video games, TV binge-watching, and hoarding.

In this sense, using a substance, event or object may help an addict re-gain a temporary sense of power and influence over their current “out of control” life situation. Instant gratification (from using) becomes a necessity to cope with a deep sense of emptiness.

Through my work, I’ve come to consider this perceived emptiness a spiritual dis-ease. It’s the lack of wholeness or “soul loss” that drives us in an endless pursuit of satisfaction. Often one may wish to escape the material world altogether. Yet, a disconnection to physical reality and the world around us can leave one feeling as if life has no meaning or purpose.

Upon examining the natal charts of numerous well-known addicts, I have noted a long list of astrological traits and aspects that may suggest addictive tendencies.

However, by using astrology to bring conscious awareness to one’s addictive tendencies, we can begin to find healthier, more spiritually fulfilling ways to meet our own needs.

One of the most famous and inspirational addicts of our recent generations is former First Lady Betty Ford.  It’s through Betty’s courage facing her own addictions that she brought the issue to public awareness. 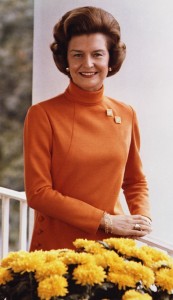 Betty was an outgoing and out-spoken woman with an Aries Sun and many planets visible above the horizon. And with Mercury in Taurus in the 9th House, she knew she had something inspirational to say. Betty wanted to be seen as a woman who could “do it all and serve people in need” – she was a fighter for many worthwhile causes, as expressed with her Virgo Ascendant with Mars rising.

But Betty’s life was plagued with tragedy. At age 16, Betty’s father died of carbon monoxide poisoning. In conjunction with a very tight opposition of the Moon in Pisces in the 7th House opposite Mars in Virgo in the 1st House, this accident may have been the impetus of relationship challenges. Her fear of abandonment created a great deal of emotional heartache.

Betty’s first husband was an alcoholic; they divorced due to “excessive, repeated cruelty.”

Her second marriage to Gerald Ford wasn’t easy either. She had to fulfill the responsibilities of both mother/father to their four children during his long absences in pursuit of his political career. The obligations and duties as a Congressional spouse also took their toll.

To make matters worse, due to a pinched nerve in her neck, Betty had been prescribed opiate painkillers in the 1960s. Betty would experience significant pain from flare-ups from time to time, often coinciding with heavy stress, which deepened her dependency

Another quality that may have attributed to Betty’s addiction to alcohol and painkillers was her larger-than-life persona. Her extravagant behavior is expressed in her chart through natal Jupiter in the 10th House square her Ascendant/Descendant axis.

She and Jerry were already planning retirement when he was appointed Vice President in 1973 due to Spiro Agnew’s resignation. Soon after, they were thrust into the roles of President and First Lady when Richard Nixon resigned on Aug. 9, 1974, amidst the Watergate scandal.

After nearly three years in the White House, her life spiraled out of control due to her alcoholism and painkillers. In 1978, the family staged an “intervention” for Betty.

Despite the trauma and setbacks, Betty worked tirelessly on women’s equal rights, pro-choice abortion rights, and gun control. Eventually, she would bring that same determination to alcoholism, drug use, and the process of recovery by opening the Betty Ford Clinic and becoming one of the first outwardly spoken advocates on addiction.

With this very brief delineation of Betty’s chart, we can see many aspects which translated to her succumbing to addictive behavior. Yet, she was able to transcend her “lost spirit” by using the gifts of her chart — her compassion, her voice, her truth, and her determination to help heal thousands of others suffering from addiction.

In essence, Betty was able to raise her vibration and live life more consciously, enabling her to heal and serve others due to her own self-undoing.

Astrology can be a powerful tool to help bring a spiritual perspective to those struggling with addictions. It can help identify our strengths so we may pull ourselves to higher functionality.

An astrologer such as myself can work with clients individually, alongside a medical professional, and help uncover issues within the natal chart that may have led toward addictive behavior and identify strategies to find ways to break the cycle once and for all.