The sweetest Moon of the year, May's Taurus New Moon beckons you to a satisfying connection with your deepest self. If you'll allow yourself to be seduced, that is.

The Sabian symbol for the degree of this lunation foreshadows her invitation: “A symbolical battle between ‘swords' and ‘torches.'”

Reflects Dane Rudhyar, one of the founders of modern astrology:

“When Gautama, having sought in vain for the answers to his questions among the teachers of tradition, sat under the Bodhi Tree, had to fight his own battle in his own way, even though it is an eternal fight. The spiritual light within the Greater Soul must struggle against the ego-will that only knows how to use the powers of this material and intellectual worlds.

“There is no possibility of escape; it is the energy that arises out of the present moment — the inescapable now – that the daring individual has to use in the struggle.”

Now it's our turn. Recline under the tree and await illumination from within.

Moon and Friends in Taurus

It's said the Moon exalts in Taurus. It's no wonder; this earth sign ruled by sensual Venus encourages us to revel in Nature's bounty.

The Moon and Sun are also joined in the sign of the Bull by Mercury and Venus. The sky is a cosmic version of Boticelli's famous painting, La Primavera. 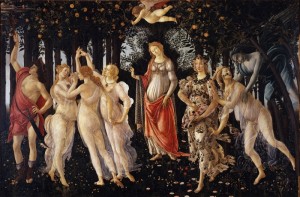 Botticelli's Primavera features Mercury, Venus and the three Graces at the beginning of spring.

Here we're reminded that the celebration of life, love and Nature are all sides of the same coin.

“Many moons ago [I heard] from a healer of sorts who believed that the disconnect from nature was the cause of depression and anxiety… in modern societies. The cure? To touch bare feet to the Earth at least 10 minutes per day.

“It was one of those things that … I immediately dismissed as nonsense. Far too simplistic for such complicated issues!  [But] while writing this article … it clicked: overcomplicating things is something Taurus does not really like, preferring simplicity.

“Just like running your bare feet through grass, [it's time to hit] “pause” on the craziness, slowing down enough to hear natural rhythms and do something that matches them.”

For those who can't bear to pause completely, this New Moon may be a potent time to get to the root of the matter.  The soil is good and fertile, though your harvest may take time to come to fruition.

“I believe in the power of Taurus, and I believe this New Moon can be a potent ally to seekers, fighters, practical mystics and visionaries alike.

“In fact, my plans for this New Moon don’t involve relaxation and comfort foods at all. … I have a goal in mind – one I’m willing … to move towards the Taurus way: one foot in front of the other, building bit by bit, day after day, ready to fall and face disappointment before I can reach my destination.

“There is at least one stereotype about Taurus that's not entirely off the mark — it’s stubbornness when it comes to pursuing something passionately, actively, zealously.”

The cosmic energy is heavy, literally and figuratively.

Along with the New Moon, Mercury and Venus in Taurus, we have two other planets in Earth signs: Jupiter in Virgo and Pluto in Capricorn. Together, these planets form what astrologers call a Grand Earth Trine. 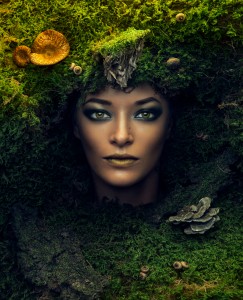 Since there's no escaping it, you may as well sink in and embrace your earthy bits. Just by letting go, you may discover the treasure buried within.

“The contact to Jupiter in Virgo alone would be sufficient to blast this Moon cycle with the energetic equivalent of Miracle Gro.  With Pluto involved, the effect is not only supercharged, but it’s also reaching deep into structures, foundations and our very beings, through cracks that have opened over the past four years or so.

“Enhancing the reach even more is Jupiter and Pluto’s retrograde status, which makes them operate as cosmic backhoes, pulling back surfaces, exposing buried layers to the air and sending nourishment to the depths.”

Do you feel like you're living in a cave? Or a womb? Or a tomb?

The six Earth planets are also joined by five retrograding ones. Retrograde planets appear to travel in the opposite direction from their usual nightly motion.

“Until Jupiter stations direct on May 9, there are five retrograde planets… This makes the world appear to slow down so you are living in a different dimension. It can indicate an increase in strange or fated events, including accidents and physical or psychological violence.”

How you handle this slow-going energy may be a reflection of how you feel about spending time in quiet self-reflection. If you enjoy turning inward, it's a slice of heaven.

Of course, if you're the psychologically claustrophobic type, you may need to remind yourself it will be over soon. But then you may miss out on the opportunity to go deep:

“Granted, it will be an underwhelming, slow start –  forward momentum might be next to nonexistent at first. Whatever is birthed under this New Moon has the potential to go to the distance, especially if we build on solid foundations and break our goals down into simple, doable steps; the cautious retrograde energy can help with this, while also encouraging a careful, methodical assessment of our plans and resources, a re-evaluation of clues we might have previously ignored, and the surfacing of new information and insight.”

With so much heaviness, it would be easy to give in to the siren call of sleep. Of unconsciousness.

(If you've been burning yourself out, that's not a bad plan. Accept the gift and rest.) 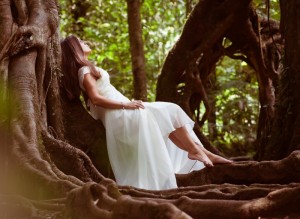 But to keep you alert, this earthy rose come with a prickling thorn: the challenging mutable T-square between Jupiter in Virgo, Saturn in Sagittarius and Neptune in Pisces. While you're visiting your own personal underworld, you may feel the call to heal some of your deep-seated trauma.

“Most astrologers agree that an associated challenging aspect is required to motivate the grand trine into action. … Jupiter retrograde and Saturn retrograde further complicate your limiting situation and suggest this may be a repeating theme in your life. This adds greater important to fixing this issue once and for all.”

When you're working at such profound levels, it can take time for changes to percolate up to the surface. You may find not all is what it seemed; be willing to walk away.

“Faith and patience are strong plays. … Stick your seeds in the ground and live in hope. But when you’re shown something or someone is lying to you, open the door and drift off.”

As if she knows the magnitude of what's she's asking us to do, Venus also offers to share her rose-colored glasses.

“With Taurus ruler Venus in her domicile, sextiling dreamy Neptune, we can even allow ourselves to get inspired by our innermost desires and longings, either in an artistic or romantic sense.”

If the dark feels too overwhelming, don't hesitate to put them on.

More hints from the Moon 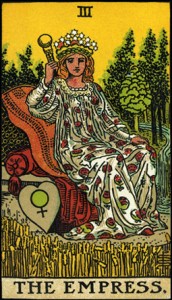 The Empress from the Rider-Waite-Smith Tarot Deck.

The Sun has 12 signs in his Zodiac. But the Moon has her own path; 28 signs even more ancient in origin. The Moon's lunar sign suggests how she will attempt to fulfill her needs.

In Vedic astrology, this New Moon falls in the lunar sign (nakshatra) Bharani:

“Bharani is the lunar sign of the yoni.  Yoni is the Sanskrit word for female genitalia and is a symbol of feminine sexual power. While this power is frequently degraded and objectified in modern times, in Bharani the yoni is upheld as a symbol for the driving force of life and a gateway to all we desire.”

In Western astrology, the lunar zodiac signs are known as the Mansions of the Moon.

The Taurus New Moon falls in the 4th Lunar Mansion Al Dabaran. Featuring an image of the “The Rider,” this lunar mansion brings “strength and tenacity overcoming obstacles.”

The Taurus New Moon delights in earthly pleasures, beckoning all into her embrace. Plant the seeds for your next harvest by embracing the magic of the present moment.