Whenever one culture conquered another in the ancient near east, the planet Jupiter was given the name of the chief god of the conquering tribe.  Jupiter was the planet linked to the “natural order” and “divine right of kings.”

Why would this be?  Jupiter is only the second brightest planet after Venus…

However, Venus is forever “tied” to the Sun; she can only be seen in the east before sunrise, or the west after sunset.

Jupiter's orbit, on the other hand, is independent, stately and measured. He can soar high overhead along the Ecliptic, the brightest object in the midnight sky.

And, he spends approximately one year in each Zodiac sign during his 12-year orbit around the Sun. He kept perfect time in the divine plan.

The Meaning of Jupiter in Astrology

The Hebrew name for Jupiter is the same as the word for Justice.

To be aligned with Jupiter means to live in right-relationship with the divine, to have integrity, mercy and gratitude.

Jupiter inspires us to believe it will all work out in the end. He encourages us to have faith, to be optimistic and expansive, to be open to possibilities, and to explore.

And Jupiter knows he’s got a role to play in helping others too. His activities include advocating, giving support and encouragement, even wealth and abundance.

Jupiter in a Horoscope Chart

Jupiter’s energies pull us upward, aligning us with a larger plan-for-being. In an astrological chart, Jupiter’s presence gives clues to how you experience:

In the Goldilocks’ sense, Jupiter is “just right.” Consider what being in the zone feels like to you, and you’ll be able to brainstorm your own keywords for Jupiter.

The Astrology Glyph for Jupiter

Jupiter’s glyph has changed more than any other over the centuries. It’s been a Greek letter Z, for the first letter in Zeus, Jupiter’s counterpart. It’s also been linked to the lightning bolt, Zeus’ eagle, and a staff of Justice.

Today’s glyph for Jupiter looks like a fancy number 4; it’s a crescent, joined to a cross below. Theosophists called it the triumph of mind over matter.

Want to Learn How to Read an Astrology Chart – in 7 easy steps?

Download our FREE “How to Read a Chart” Guide today!

You’ll also get our FREE exclusive video training series on How to Read a Chart, where you’ll learn: 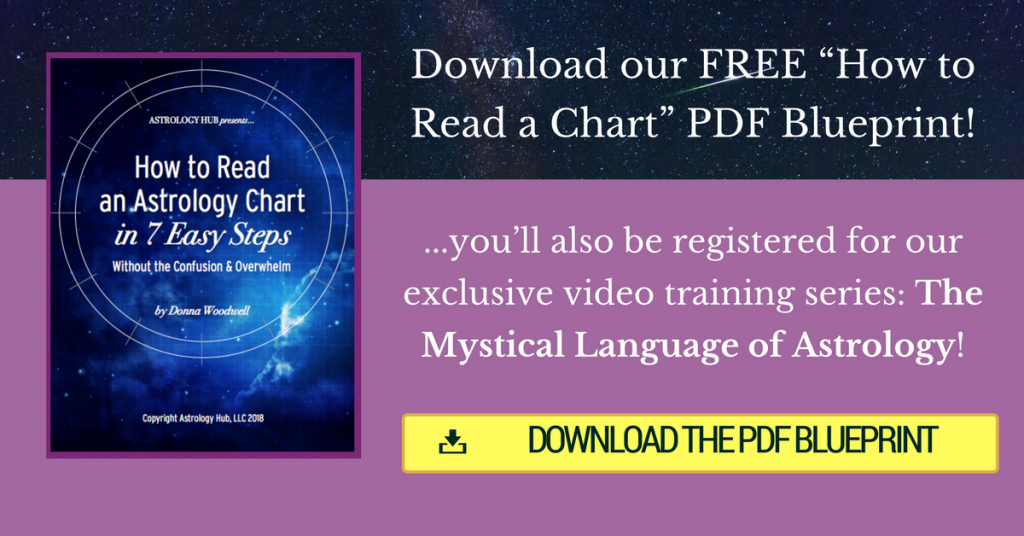