Do you feel it? In much of the Northern hemisphere, spring is well on its way. And the Virgo Full Moon on Mar. 12/13 may inspire you to throw open the windows, and throw out what’s in the way of achieving your heart’s desire.   Even if what’s in the way is your own ego-driven beliefs or pride.

On the mundane, practical level this means:

“It’s certainly a good idea to set practical intentions for this Full Moon — spring cleaning, getting back on a health or fitness bandwagon, cleaning up the physical or emotional messes of the eclipses — that involves keeping your hands and mind busy. …

“Otherwise, if the energy of this Virgo Full Moon is left unchanneled it can be a stressful and frustrating Full Moon, full of nervous energy and tension. It is a good one to focus on your health and diet, but I should warn that some of you may be prompted into taking better care of your health via a health issue popping up.”

On a deeper, psychic, or spiritual level, the message remains the same:

“With the current celestial line-up, you stand to gain mental and emotional clarity, empowerment, focus and scads of practical backup for your decisions. You may redraw a line or two. You may decide to drop a habit or adopt a new one.

“And [if you do it well] you’ll find a momentary respite from the mad whirl of life. They’ll stabilize your emotions and restore your sanity (or a semblance of it) and send you out back out with a solid, confident core. Think — as the Virgo Moon will so often incline you to do — of the takeaway as your own inner anchor. “

Poor Virgo is a much misunderstood Zodiac sign, associated with nitpicking and detail work.

When in reality its driving force is this: Virgo sees what’s possible — what’s ideal — with crystal clarity.

On good days, Virgo uses its insight and discernment to chart a course to keep moving forward toward that distant horizon. On bad days, it’s mired in self-recriminations that we aren’t there yet.

Though you may not be a Virgo yourself, this is still the choice placed before us all under the Virgo Full Moon.

“Being in your head is not necessarily avoidance. Sometimes stepping back and having a think is a healthy response. An emotional pause button is one of the gifts of this year’s Virgo Full Moon. Pressing it might take some effort, given the pace, intensity and emotional riptides of life at present. And they are exactly why this break is needed.

“Virgo is prone to analysis, discernment, finding flaws and identifying room for improvement, a bent that is at odds with the emotions that crest at a Full Moon. Those waters are particularly high, alluring and all-encompassing right now, making the Virgo lifeline all the more a cosmic gift.”

Amping up the stakes, Virgo’s ruling planet Mercury opposes the Full Moon, and makes an exact square to Saturn on the same day. Use the energies to get really clear on your plan for moving forward, or risk getting mired in self-pity or intolerance.

“The vague idea or unproven solution will not be good enough. You will have to prove it. Or, you may have to sift through the extras until you narrow it down to just one. Virgo means precision, and Saturn square Mercury formally defines and limits an idea. Standards will be high, and analysis will be a huge part of the results. Nothing will be communicated casually. This could be an official declaration, that leaves zero room for compromise.

“You may doubt the results, or worry about your ability to deliver. A Saturn square does not instill confidence, and as far as Virgo is concerned, nothing is good enough. But you can use this friction to your advantage. Ensure that what you’re saying/writing is top quality, and absolutely true. You’ll have to take your game to the next level — no half-assed efforts or omissions allowed. But if you can meet Saturn’s challenge with focused intent, while taking full responsibility for your words, you could net some impressive results. And if you get unpleasant news, you’ll know exactly what to fix.”

Or, in the immortal words of Dori: Just keep swimming.

Nemo and Dori seek a way through the dark in Finding Nemo.

Working in a Coal Mine

Astrologers also look for aspects to the Full Moon to further illuminate how we’ll feel its effects coming to fruition. This Virgo Full Moon tangles with both Pluto and Saturn.   Both were ancient gods associated with bringing forth riches from the ground, or the underground. Your hard work has the potential to reap a bountiful reward — but you have to roll up your sleeves and dig for it.

“A trine between the Moon and Pluto, lord of the underworld, [reveals] hidden treasures and the evolutionary processes of nature. With logic and the non-rational working together, monumental focus and personal power are inevitable — if you don’t talk or worry yourself out of them…

“That enhanced sorting and analyzing comes in handy if phobias and other psycho-beasties crawl out of the open channel between emotions and the subconscious.  (You’ll see this in others; step into observer mode to check it out in yourself.) The trine lends an organic ease to tackling and embracing hard truths and claiming your emotional power, both of which could take care of any creepy-crawlies, not to mention boundary bleeding.”

“Moon square Saturn isn’t a fun aspect, usually showing emotional coldness or depression or suppression. It also shows there’s a lot of tough work to be done. That’s fine, Virgo likes to work! This Full Moon looks like one full of potential to make things work for those not afraid of work. “

Homage to Saturn in Sagittarius square Virgo Full Moon. (I can’t even imagine how he got the horse to go in the coal mine.)

A Change Will Do You Good

“Jupiter opposite Uranus greatly increases your need for personal freedom and excitement. You will feel a strong urge to rebel against anything that is stopping you from having fun and doing what you want. A sudden event can release your built-up tension and lead to a major change in circumstances. The more restricted you have felt, the more upsetting the change will be.

“There is a tendency to totally renew and start fresh. However, the more extreme the change, the harder it is to adjust to the new conditions. This is especially so if a close relationship has been holding you down. Consider also, the financial ramifications of any big change.”

The word aspect derives from a Latin root meaning “to see, or to behold.” So, by definition, aspects occur when planets have something in common — the element of the Zodiac sign they are in, or the sign’s polarity of mode of expression.

And this is how the modern aspect called an inconjunct gets its meaning. Traditionally speaking, it’s a non-aspect, meaning the planets involved have nothing in common. And, since they don’t speak the same language, they are locked in a struggle to figure out how to take any action at all. Something must change — or adjust — to get back on track.

“I don’t typically use the inconjunct (sometimes called the quincunx) at lunations as it’s considered a minor aspect. However, the orb is very tight and Jupiter and Uranus in opposition are still forming a cardinal T-square with Pluto in Capricorn, and the Full Moon trines Pluto, activating the cardinal T-square. Not in a major, earth shattering way; the inconjunct is minor. This looks like temporary headaches, annoyances, grievances, and especially moodiness.”

“Jupiter Rx in Libra makes an inconjunct to the Sun, amplifying illusions and expectations. The big hope will be out of alignment with what’s actually going to happen.

“Uranus in Aries makes an inconjunct to the Moon, jarring the need for precision, with urgency. It may feel like an emergency, with results expected ASAP. But you can’t rush the analysis. There may be a push to break some rules/take some short cuts. You just can’t, especially with a Saturn square in the works. You will have to deliver results (Uranus won’t allow you to wait), but you’ll have to do it carefully.”

Not only are these inconjuncts close alignments, but they link the Virgo Full Moon to the ongoing Jupiter-Uranus opposition.

“This aspect is [what the Hubers’ called] the irritation rectangle. [It] requires that inner tension be used as the impetus for personal development, not that other people are overloaded by forcing one’s knowledge onto them. …

“This ‘Rack’ links the Full Moon once again to the ongoing Jupiter-Uranus opposition. This means that at this Virgo Full Moon we have the opportunity for personal enlightenment and awakening. It also promises to set us free from the bondage of imprisoning mindsets. Information technology (with its 24/7 news feed) can enslave or liberate, depending how much we allow ourselves to be distracted from our goals.”

Deep soul healing is on the menu as two oft-mentioned asteroids align with the Pisces Sun during the Virgo Full Moon: Chiron and Pallas.

“With the Pisces Sun conjunct Chiron, and Virgo’s ruler Mercury close by, boundaries dissolve. Wounds and messages and senses of self blur, blend and pass by osmosis.  Aware or not, we’re sensitives, sponges and mind-melders. The potential is equally high for transcendence, bliss, compassion, spiritual healing and communion, and for giving in to a bottle, the voices in our head, lies, delusions or insanity.”

“The Pisces Sun conjoins Pallas and Chiron, casting light on the wound, plus healing strategies (Pallas). The Virgo Moon will indicate the solution or improvement that addresses the issue. As described in this week’s horoscopes, information pertaining to this Moon will start to trickle in around Mar. 6, when the Sun conjoins Mercury. As Mercury goes on to meet Chiron and Pallas (Mar. 10) more details about what hurts, and what you can do about it, will emerge.” 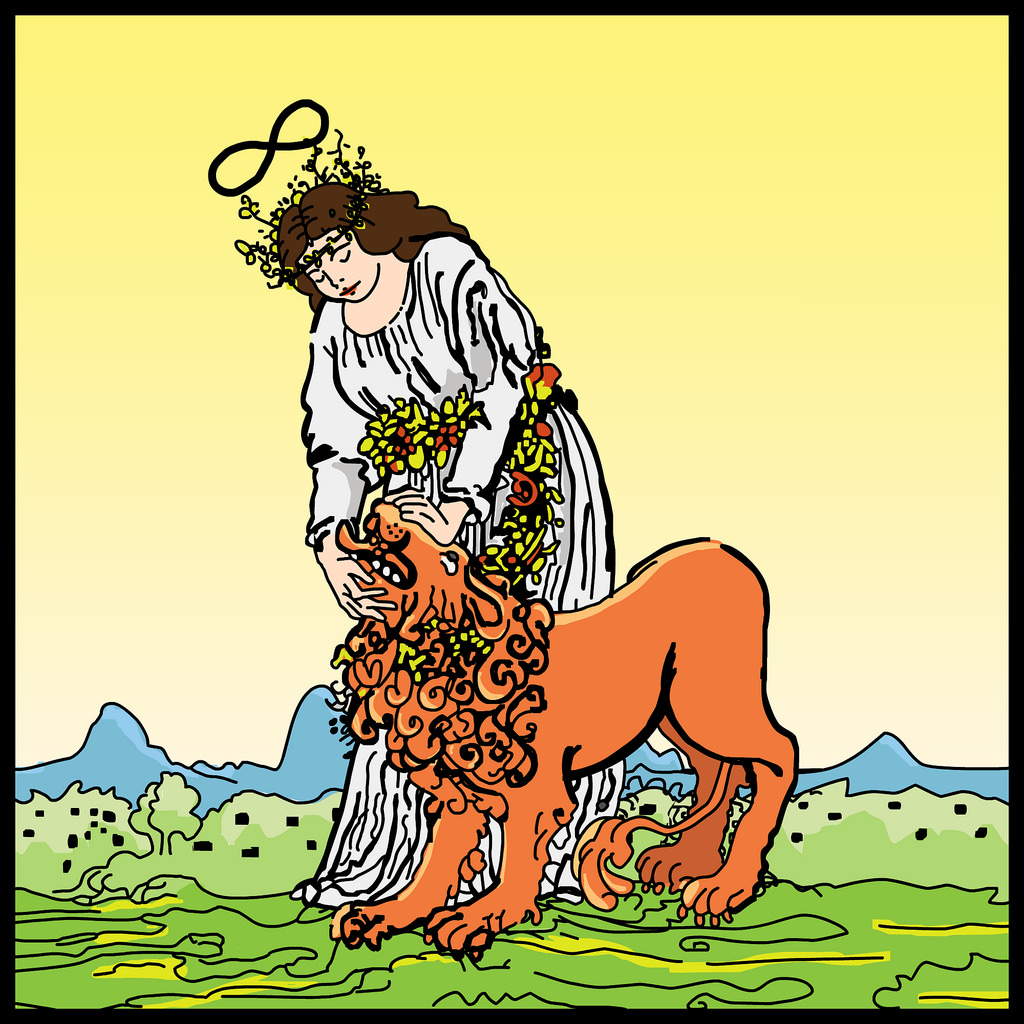 A mathematical harmony of cycles within cycles, astrologers find meaning in many ways. Some even find meaning in each specific degree of the Zodiac; the most popular of these systems in the 20th century was the Sabian Symbols.

This Full Moon falls in the 23rd degree of Virgo; its image “A lion tamer displays his skill and character.”

An image evocative of the Tarot card Strength, astrologer Dane Rudhyar wrote that this degree, suggested “the need to tame one’s own vital energies to achieve one’s potential and destiny… We see here the development of the concept of training. The true aristocrat is the individual who is in complete control of his or her vital energies; at the spiritual level this includes the overcoming of pride — pride in one’s strength and mastery.”

As the major lights of the heavens, the Sun and Moon both have their own Zodiacs. Western astrology has given preference to the 12-sign solar Zodiac. However, the Moon still has her own, the 28-sign Zodiac known as the Mansions of the Moon.

This Virgo Full Moon falls in Lunar Mansion 14, which the Arab astrologers called Al Simak. I nicknamed it “The Harvest,” for it’s a time for cutting the wheat from the chaff. Now is the time to cast off what no longer serves you, so you can move forward without the extra baggage.

Tap into your innate wit and wisdom to discern the essentials. Drop off the rest at the recycling center; you don’t want to waste your energy lugging it around any more. You’ve got better things ahead.