A few months ago my daughter told me one of her friends said she looked like Shailene Woodley.

I freely admit I live in a cave (albeit a nice, book-lined one). So of course I asked, “Who's that?”

“You know, the actress in Divergent?”

“Oh, come on Mom.” And off my Scorpio child stomped.

Leaving me to figure out what it was all about. So I rented the movie from Amazon.

Little did I know that I'd be watching one of the best explorations of the astrological allegory to be filmed in recent times.

For those like me who haven't read the books, or watched the movies, I'll summarize:

In the Divergent trilogy, society in the post-apocalyptic walled city is divided into five factions.  Regardless of which faction you're born into, when you turn 16, you decide for yourself which is the best fit for you. All are given aptitude tests, but the final choice is your own.

As a writer myself, I'm always curious how authors come up with their ideas.

Of course, others have asked Divergent author Veronica Roth what inspired her. Here's what she's said:

“I have a thing for groups, and I always have. It interests me in speculative fiction, [like] the houses at Hogwarts… I also have a long-time (now abandoned) obsession with personality tests, especially the Meyers-Briggs personality tests (depending on the day I'm an INFJ, INFP, or an ISFJ. I've forgotten what all those mean, though), and the enneagram (I'm a number 1: The Perfectionist. Now that one never changes. Ha).”

Now, it's well known that J.K. Rowling based the Hogwarts houses on the four classical Greek elements which they believed made up all matter — Fire (Gryffindor), Air (Ravenclaw), Earth (Hufflepuff) and Water (Slytherin).

Though she may not have realized it, Roth's faction system taps into an equally old classification system — the five visible planets: Mercury, Venus, Mars, Jupiter and Saturn — which probably accounts for their deeply resonant appeal.

Since humans have looked up at the night sky, we've noticed something peculiar — five of the “stars” move around a lot. Now we know them as planets.

(In fact, the word “planet” comes from the ancient Greek word “wanderer.”)

When humans notice something is not like the others, we start wondering why. What it means.

And so we've developed whole systems around the number five as significant to the cosmic order. (Also the number seven for the same reason — five starry planets plus the Sun and Moon equals seven.)

Roth's five faction system in Divergent are another perfect fit.

Let's look at the five factions and their astrological significance.

(To stay true to the fanbase, I've drawn the faction descriptions from the Divergentlife.com website.)

Members of Erudite are “characterized by their knowledge… It was formed by those who blamed human ignorance for the faults of society.” They sought ways of “eliminating ignorance and darkness from human minds.”

Traits of the Erudite faction include: curiosity, constant pursuit of knowledge, and eagerness to read and discuss the latest books and news. “The faction produces most of the city's librarians, doctors, scientists and teachers. They keep records of the city and the factions. Most technological advances are due to Erudite.”

Erudite's peeps are clearly Mercury's peeps. Mercury — the messenger of the gods — was known for his intelligence and inventiveness. Not only did he carry the gods' messages, he served as the divine record keeper and advocate for those who study, learn and teach.

Members of Amity have chosen the way of peace, love and harmony.  They seek a society without conflict or discord.

“They love music, art, games and laughter. They give hugs when greeting. They vote on everything, almost unanimously. … They run the farms, which provides some of the food for all the factions. They tend to be counsellors, caregivers and artists.”

Amity is Venus personified. The goddess of Love and Beauty craved peace, harmony and pleasure. It's her fertility that guaranteed bountiful harvests. If you needed to bring people together, Venus was your go-to goddess.

“Why walk when you can run?” might be a mantra for members of Dauntless. Known for their courageous resolution in the face of danger, Dauntless was founded “by those who blamed cowardice for society's problems.” To them, “the only answer is to face your fears bravely.”

The Dauntless are know for their “loud, expressive” natures, as well as their “fighting and physical skills.” They served as the Warrior class in charge of security.

Can we say Mars? The Red Planet's named for the Roman god of war and warriors. He's the planet associated with living out-loud, and following your passions wherever they lead. The planet of being, well, Dauntless.

“Candor was a faction formed by those … who believed that dishonesty is the key fault in human nature that began evil and war. … They greet each other by shaking hands. They provide sound leaders in Law.”

Those who've only studied modern astrology may not realize it, but Jupiter was originally known as the planet of moderation and “right relationship” with the cosmic order. In ancient Hebrew, the name for the planet Jupiter was “Zedek,” the same as the word for “justice.” Jupiter was also linked to truth-telling and prophesying.

Renunciation was the watchword of the Abnegation faction. They reject vanity and other worldly pleasure to serve others.

“Abnegation was formed by those who blamed selfishness for human nature's errors. … Their morally incorruptible quality made others consider them the reasonable faction to be able to govern the city as political leaders.”

Pure Saturn heaven. To the ancient Greeks who invented our Western astrology, Saturn's virtues included temperance and self-discipline. Saturn's said to have once ruled over a golden age in which no laws or punishment was required because all its members live with perfect morality and self-restraint.

So I hope you now can see the one-to-one relationship between planets and factions.

What about the main arc after which the trilogy is named — Divergence?

(Spoiler Alert: If you haven't read the books or watched the movie yet, you can't say you weren't warned.)

Through the course of the story, we follow Beatrice “Tris” Prior, who discovers she doesn't just fit into one faction — she fits in all of them. And hence, she's marked as “Divergent.”

The drama starts with trying to identify, or even destroy, Divergents, in order to protect the stability of the faction system. Later we learn that the faction-based society is actually a post-apocalyptic genetic experiment to restore the human genome to its full potential.

Tris is the first to be born 100 percent “Divergent” — meaning fully actualized. Which indicates to the genetic scientists that their experiment is working.

And this too is precisely the whole point of the astrological allegory.

Once upon a time when the astrological model was devised by the ancient Hellenistic Greeks, it was essentially a model to help you determine your planetary “faction.” We still carry the remnants in our language: things were classified as mercurial, venial, martial, jovial or saturnine.

And though you may have been “born” into one of the factions, to become more “divine-like” (read fully actualized), was to embrace all of the planet-factions. Embrace them in order to transcend such limitations.

In other words, to become cosmically Divergent.

There were philosophical systems and ritual practices to help followers do just this; scholars describe these as part of Gnostic or Theurgic mystery religions. We could also call them shamanic astrology.

But in short, to be “Divergent” was to become “enlightened.” And astrology was an essential tool for facilitating enlightenment.

As have many who've worked with personality typing systems — or even Sun-sign astrology — Roth has clearly hit on the key challenge with the method.

Static classification systems that force us to identify with one way of being run the risk of dis-empowerment, rather than empowerment. We blame our quirks on fixed personality type, or stars. We feel like we have no agency — no choice — in how we live. 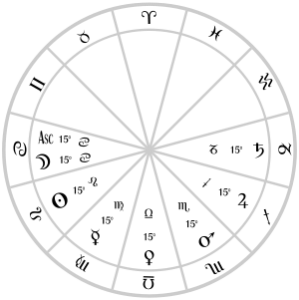 And this is precisely what the ancients tried to find a way to work around. On the one hand, they understood there would always be natural aptitude and inclination, but on the other, they realized that to be trapped by one's inclinations limits us, rather than setting us free.

Their idealized astrology chart, the chart of the “world before the fall” was known as the Thema Mundi.

In it, each planet — the five visible ones, plus the Sun and Moon — is in its own Zodiac sign. All of them show tremendous “essential dignity.”

It is the chart of one who is Cosmically Divergent.

And, while this chart may not be able to exist in Nature, it's the ideal our souls continue to strive toward.