As I pull together the forecast roundup for the June 20 Sagittarius Full Moon, lyrics from the musical Man of La Mancha ring in my ears:

“Hear me now, oh, thou bleak and unbearable world

Thou art base and debauched as can be

And a knight with his banners all bravely unfurled

Now hurls down his gauntlet to thee

“I am I, Don Quixote the Lord of La Mancha

My destiny calls and I go

And the wild winds of fortune will carry me onward

Oh, whither soever they blow

Whither soever they blow, onward to glory I go”

Like Cervantes' Don Quixote, the Sagittarius Full Moon certainly has a reputation for getting fired to embark on a “sacred” quest.  Sacred to the adventurer, that is.

But under this lunation, we must all take another look at the promise — and pitfalls — of taking upon oneself the mantle of a sacred duty. Are you really ready to face the monster in the mirror, or are you just tilting at windmills?

No, you're not seeing double — this is the second Full Moon in Sagittarius in a row. (You can read about what astrologers had to say about the first Sagittarius Full Moon last month on Astrology Hub.)

When we have two Moons in a row in the same sign, we have a chance to go deeper into our understanding of the Zodiac sign involved. In this case, Sagittarius, the centaur (half human, half horse).

Ruled by Jupiter, Sagittarius ask us “What do you believe? And how will you act on your beliefs?”

“How have this month’s complex blend of feelings related to the way you view yourself and the world? Consider what they — and your reactions — reveal about what you believe to be true. This inquiry goes beyond whether you view life as a glass half full, empty, cracked and leaded, or refillable. Likely a situation or two had you following scripts (internally at least) you picked up years and years ago. Want to change them? There’s no time like the present.”

How often are there two Full Moons in the same sign?

The degree at which the Full Moon (or New Moon) occurs precesses a “backward” through the Zodiac a little each month. It takes approximately two years and eight months to move from 29 degrees of a sign back to 0 degrees. Then it starts the cycle again.

That also means every two or three years, as the lunation restarts the cycle, we'll have often two full Moons in a row in the same sign, first one at 0 or 1 degrees, then a second at 28 or 29 degrees.

Which Zodiac sign this occurs in varies over time, but on average, a sign will be spotlighted by two full Moons once every 30 years or so. In the case of the Sagittarius Full Moons, the last time we had two in a row was May and June of 1997 — almost 20 years ago.

Whatever issues you were working through then, may be up for review as well — why keeping a journal can be a great asset to your astrological studies.

The last degree of any sign is a complicated place — like graduation time, we're wrapping up old business. The new looms, but we're not quite there yet.

Ivy Jacobsen called the final degree of a sign the anaretic degree. The concept of an “anareta” stemmed from an older tradition, a “destructive” place in a chart that brings challenges and difficulties. It's where we must face up to the consequences of what we've created, for good or ill, before we can proceed.

“The anaretic degree [is] a highly charged and even “karmic” degree. It contains the full experience of the sign, all the lessons learned. While eager to change signs, this degree often points to delays in change or a feeling of being held back, to review one last time the lessons of its sign before being allowed to move forward.”

“The last degree of any sign is its most intense expression. It’s a culmination of the sign’s qualities before the boundary to the next sign is crossed. Adjacent signs are really not much alike, as they differ in both element and mode. There’s this idea that the edges between signs are kind of blended, so one shades into the other. My Sun and Moon are both at 0 degrees, and I’ve never found this to be true. The idea that the final degree is intense and the shift significant fits my experience much better.”

Okay, so what do you do about it? Kathy Biehl comes to the rescue again with some additional advice:

“Focus on the now, for now:  How have you been feeling this month? Look back on the most highly charged developments you’ve experienced recently.  Pick one. Immerse yourself in the energy of the drama and allow it to swell into cartoonishly large proportions. Escalate it to the point of ridiculousness, until you laugh. Out loud. Fake it if you have to; that’ll be the spark that sets off the glorious, soul-clearing laughter that is the gift of Sagittarius.”

Falling on the Summer Solstice

The Sagittarius Full Moon is even more potent for occurring just hours before the Summer Solstice, when the Sun moves into the Zodiac sign Cancer. Earthsky says the last time this happened was 1967, and it won't happen again until 2062.

“The name “solstice” means “sun stands still,” which it appears to do for three days. So our Sun, the fiery energy that fuels our world, is paused for emphasis, finding yet another way to focus our attention on this moment and its patterns. The Solstice is a threshold, a liminal time. This is a time when perceptions, ideas, and expressions can shift. Doors are opening.”

Astrologers say the first degrees of Aries, Cancer, Libra and Capricorn mark the “world axis” — a turning point not just for us individually, but for humans collectively. What's personal becomes political, and vice versa. The decisions you make as an individual have the potential to change the course of history.

When  Full Moon occurs in the last degrees of a sign, it often takes time to see the changes made underneath play out in the external world.  That's because after the moment of the Full Moon, the Moon turns void of course, making no further aspects until it enters the next sign Capricorn.

“The Sagittarius Full Moon goes void-of-course just after its exact opposition to the Sun, and a lot of steam is quickly lost. A popped balloon. What seemed so important leading up to the Full Moon may seem irrelevant after. “

Yes, after more than two months of backtracking, the Mars retrograde is finally drawing to a close.

So, long story short, while you may see what needs to be done, be patient with the process. It may take a little time, to find the right time to act.

So, brave knight-errant, there's no better metaphor for the windmills you're tilting than a mutable grand cross. (A grand cross even looks like a windmill.) 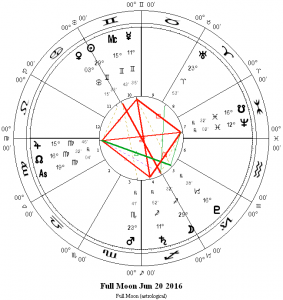 All month, this windmill's been spinning around issues of exactly HOW to change.

During the previous Sagittarius Full Moon, the Full Moon itself was tied into the astral configuration. This time the planet Mercury has replaced it.  That means both planets that rule the mutable signs (Mercury and Jupiter) are caught by the spin.

“The second exact Saturn-Neptune square will also have just taken place a couple days prior. The mutable Grand Cross gives a feeling of everything and nothing happening at the same time; anticipation and worry and anxiety and aimlessness all wrapped up together. … While we should be looking to the future, we can’t ignore what’s urgent in the present time.”

When you're feeling trapped by the overwhelming demands of life — too much to do, not enough time to do it — how do you break free?

“Mercury, ruler of the Gemini Sun, has taken the place previously occupied by the Sun and Venus, a switch that ups the chatter level and speeds the information flow. The Sagittarius Moon’s ruler, Jupiter, is conjunct the North Node, representing the path of the future. This combo underscores the possibilities for, and the importance of, improved boundaries and healthier, decluttered thinking for all of us, individually and collectively.

“Jupiter is also the doorway for this Moon’s potent evolutionary properties. They come from the open channel between the great benefactor and Pluto, agent of unavoidable change. This pair is making the last of three easy flows, or trines (the previous were in September and March), deepening structural change, cleaning out debris, and building the foundations that are taking the place of so much that crumbled in the turmoil and upheaval since 2012. This last pass adds to the end of the era, end of the line vibe of this Full Moon.”

Before we go, let's look around for a few other astral actors that will move the plot forward.

Of course, I had to check. Yes, there is an asteroid “Don Quixote.” And, because the cosmos likes a good joke, there it is at 29 Leo — exactly trine the Sagittarius Full Moon.

Ask yourself: how do you know if your quest is just? Or if you're enemies are even real? Are you making up monsters, to justify your own desires and actions?

So many questions — but hey, no one said quest(ion)ing was easy….

On “a deeper level, Acumen gives a very acute perception at the intuitive or psychic level. The word Acumen actually means keenness and depth of perception, discernment, or discrimination especially in practical matters.”

Sounds a bit like Don Quixote's friend Sancho Panza, who helps him stay connected to the world of the real. Who or what is your Sancho Panza to help you along the way?

The Sabian degree meaning symbol for the 30th degree of Sagittarius is “The Pope, blessing the faithful.”

“Just who ‘The Faithful' and who ‘The Pope' is can be a very interesting thing. Whether our candidate is winning in the election, or not, whether we, or our friends are blessing us with their time, energies or thoughts, or, whether we have to be in a particular situation or ‘faith' in order to be blessed can be interesting questions. We can ‘Bless' others as well: We can give them our time and energy and best wishes. Divides can occur when people don't come together as one, as there can be an ‘us and them' mentality.”

There's also a 28-sign Lunar Zodiac, know in the West as the Lunar Mansions.  This Sagittarius Full Moon falls in the 21st Lunar mansion Al Baldah, which I call “The Closed Door.”

In the tradition of astrological magic, it's a good time for putting an end to a situation. Seek closure, and end arrangements that no longer serve. As they say, when one door closes, another opens.

The second of two Sagittarius Full Moons says it's time to own up to what your beliefs have created. Is your cause a just one, or are you simply tilting at windmills to avoid facing something deeper within.