Astrology Hub's Ultimate Eclipse Guide Tells You All You Need to Know About Eclipses.

If you’ve been fortunate enough to witness an eclipse, you know there’s something unearthly about it.

During a total solar eclipse, there’s a chill in the air. The animals are still. Day turns into night and the stars re-emerge as the Moon passes in front of the Sun.

A total lunar eclipse is subtler, but lasts longer, as the Earth’s shadow slowly tinges the face of the Moon red.

By a twist of fate, Earthlings get treated to front-row seats in one of the greatest shows in the solar system: Eclipses!

So, What Are Eclipses?

Look upward and you may notice that the Sun and the full Moon appear to be about the same size in the sky. In reality, the Sun is much larger than the Moon of course, but it’s so much further away from the Earth, they appear about the same size.

During an eclipse, the Sun, Moon, and Earth are in perfect alignment with one another, so one body passes into the shadow of another.

To the ancient skywatchers, as the major lights in the sky, the Sun and Moon represented the yin and yang of the life-force energy. The Sun represented the yang energy of light, fire, growth, and consciousness; the Moon the yin energy of the waters, nurturing, sleep, and dreaming. Day gave way to night; night, to day. Together the eternal dance of polarity set the conditions for life on our planet to thrive.

Eclipse symbolism has been central to mysticism for millennia. Sun and Moon conjoined form the Vesica Piscis, or Mandorla, called the womb of life. The Sacred Marriage of King Sol and Queen Luna is also a driving metaphor of alchemy, featured in hundreds of alchemical drawings through the centuries.

So it’s easy to understand how an eclipse – a moment when the light from one of these bodies was blocked – was a powerful omen. They were messages from the divine, a kind of cosmic “we interrupt this regularly scheduled program to bring you this important message.”

Change is heading your way, prepare yourself.

All Eclipses Are Not Created Equal

Our view changes depending on how exact the alignment between Sun, Moon, and Earth. Total eclipses occur at the closest alignments, and partial when one body only passes through the edge of the shadow of another.

Solar eclipses can also be total, or “ring of fire” (annular) eclipses. Total eclipses occur when the Moon is closer to the Earth in its orbit, and hence appears larger and can block the entire Sun. Ring-of-fire eclipses when the Moon further away seems smaller, and thus leaves the Sun’s fiery corona blazing brightly. 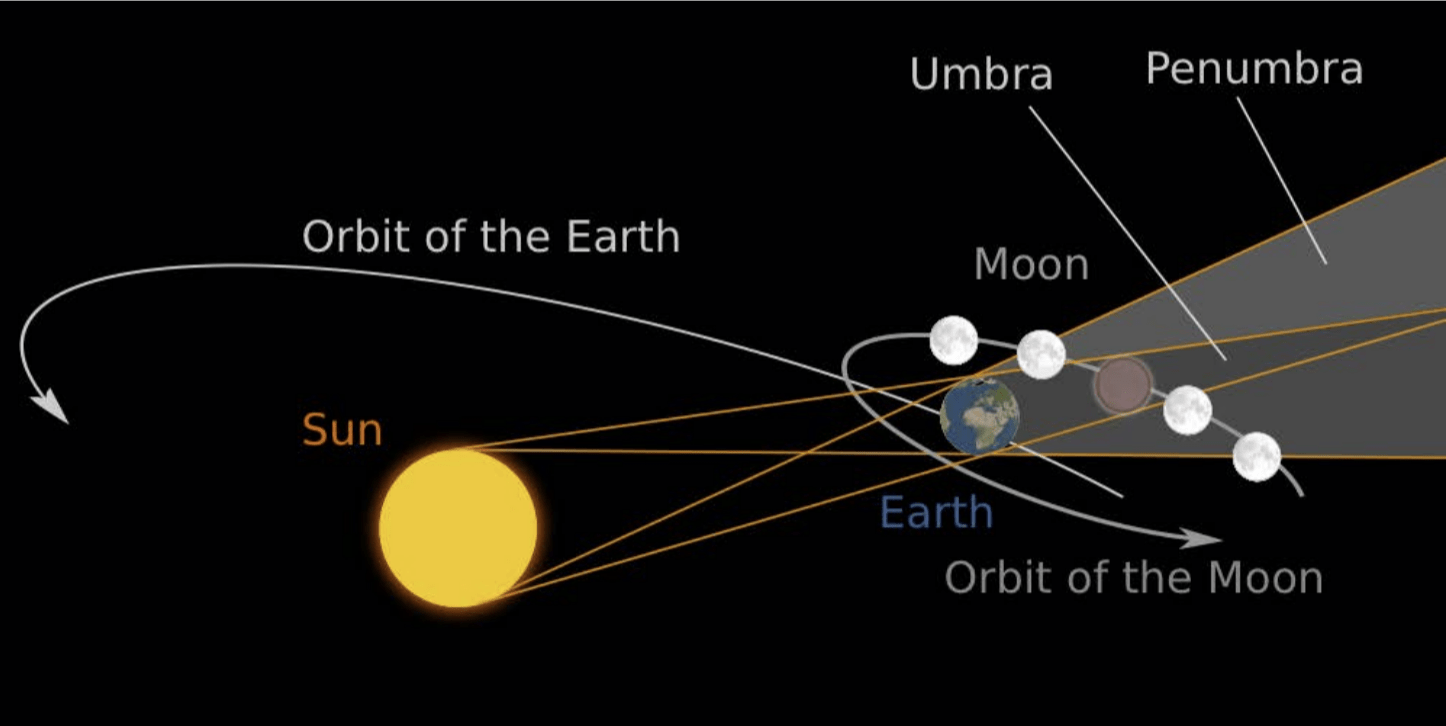 When lunar eclipses are total, we call them by the ominous name “Blood Moon Eclipse,” after the red hue the Moon turns during the totality phase. Thanks to global light pollution, a partial lunar eclipse is becoming harder to notice. Many pass unobserved except on paper.

The Seasons of Eclipses

Now, If the plane of the Moon’s orbit around the Earth were precisely the same as the Sun’s apparent path across the sky (called the “ecliptic,” because it’s where eclipses occur), we’d be treated to a pair of eclipses once every month at the New and Full Moons.

However, the Moon’s path across the sky is slightly tilted from the ecliptic.

Imagine two interlaced hula hoops, offset by 5 degrees. The two places where the Moon’s and Sun’s paths cross are called the nodes of the Moon. They are always 180 degrees apart; astrologers call this the nodal axis.

This is why in astrology, the north node has been associated with moving toward or bringing in something; the south node with moving away or letting go.

Eclipses can only occur when the New or Full Moon is close to the nodal axis. If the New Moon falls within approximately 18 degrees of a node, we see a solar eclipse. If a Full Moon is about 13 degrees from a node, it’s a lunar eclipse.

Since it takes the Sun approximately six months to appear to travel from one lunar node to the other, eclipses only happen twice each year. The 35-day window in which the Sun is near one of the nodes is known as eclipse season.

During the eclipse season, there is always a solar eclipse. The solar eclipse is usually accompanied by a lunar eclipse at the opposite node, but not always.

Eclipses through the Zodiac

Since everything in the sky is moving, the nodes of the Moon also revolve counter-clockwise along the ecliptic, taking approximately 18.6 years to move a full 360 degrees.

To help locate celestial phenomena, astrologers locate objects along the ecliptic using a measurement system known as the Zodiac, or the “Way of Life.” The Zodiac includes 12 divisions, or signs, every 30 degrees in length. 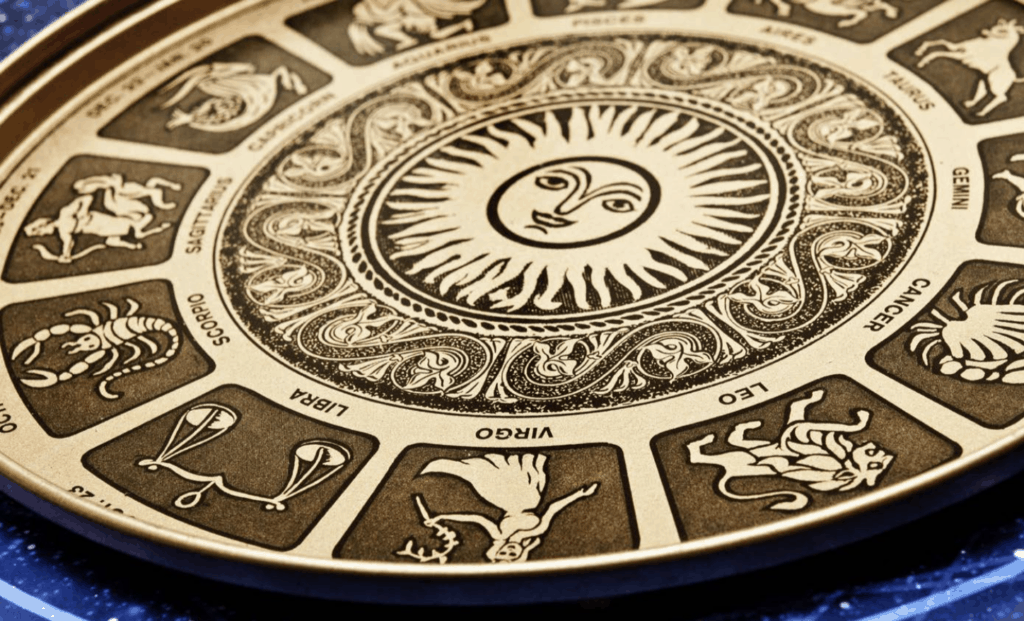 Therefore as the nodes precess through the Zodiac, for roughly 11⁄2 to 2 years, a pair of Zodiac signs plays host to the eclipse season. It’s an accelerated time for “house cleaning” for the affairs of those Zodiac signs, as we release our own patterns and begin new ones.

Or, to look at it more personally, every 9 years (roughly half of 18.6), you can expect to enter an accelerated time of change for the affairs governed by your own planets (and yet another reason the ancients saw the number 9 as such a powerful symbol of completion.)

As mentioned above, eclipses revolve through all the Zodiac signs once every 18.6 years. But even more precisely, every 18 years, 11 days and 8 hours, a nearly identical eclipse will occur 10 degrees further along the Zodiac. This period is known as a Saros, or a Saros cycle.

And, Saros cycles are also part of a much larger pattern. Approximately 72 of these geometrically similar eclipses occur in a row, evolving over 1300 years.

Each Saros Series is given a number: odd numbers for series that begin at the north pole/north ascending node, even numbers to those beginning at the south pole/south ascending node. 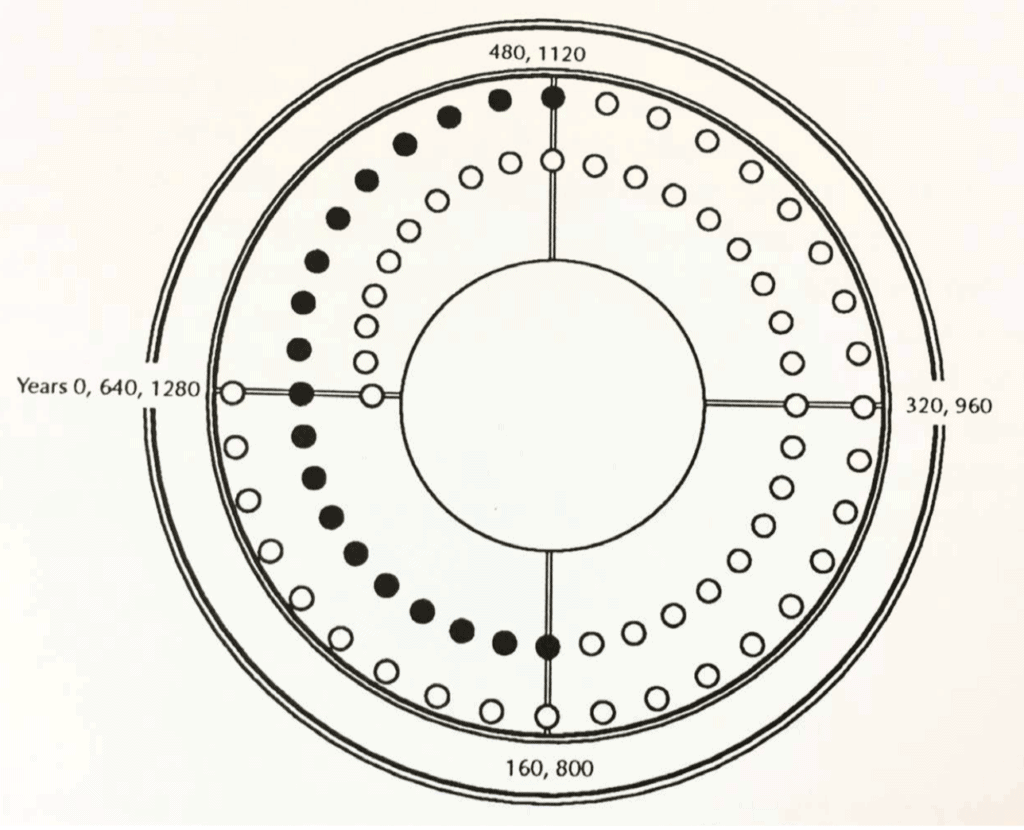 There are approximately 38 to 42 numbered Saros Series active at any given time in history; half begins at the north pole, the other half at the south. We can further divide these by the year of their occurrence, numbering the Saros eclipse families from 1-19 North and 1-19 South; each Saros family begins with the north solar eclipse season (in its accompanying lunar eclipses), then the following south solar eclipse season.

Symbolically speaking, these Saros Series outline a 1300-year evolutionary process of our collective soul. With each eclipse, we are “churning the ocean,” as they would say in Indian astrology, each pulse of the cycle seeding a change in the areas governed by the eclipse.

Given the profound impact, eclipses have on those who witness them, it’s no surprise eclipse mathematics have shown up in our sacred geometry, the mystical mathematics of the cosmic pattern.

The 19-year Saros cycle represents what mathematicians call a “centered hexagonal number” – that’s a hexagon created by a row of 3 dots, then 4, 5, 4, and 3 again.

Hexagons are a key shape in sacred geometry. Along with the eclipse Vesica Pisces, it’s found in the “Flower of Life, the Star of David, and in the Merkabah.

These symbols are also all linked to the Fibonacci number sequence, a special pattern that occurs all over the natural world — from galaxies to sunflowers to the human body. It’s a number that’s represented, beauty, growth, and the magic of life itself.

Another eclipse inspired image may be the solar triple spiral found at ancient sites such as Newgrange, Ireland. The three spiral arms represent the Saros cycle over its 1300-year history.

Over the millennia, astrologers – those who studied the heavens in order to interpret such cosmic signs – have devised numerous techniques to tease out the details of what a particular eclipse might mean for nations, and their rulers and people.

Today’s astrologers are no different. They look for clues for the meaning of an eclipse in its visible appearance in the sky, the location it shadows on the earth, in synchronicities between similar eclipses, or in other horoscopes affected most strongly by the eclipse.

How to Find the Eclipse in Your Own Chart & Create Change in Your Life!

Eclipses provide an amazing opportunity for transformation! The secret is to identify which house this eclipse falls in your chart, then use that information to ask yourself the right questions…

You can use this cheat-sheet to help you easily find an eclipse in your chart and then identify what areas in your life are ripe for transformation.

Here’s how it works: 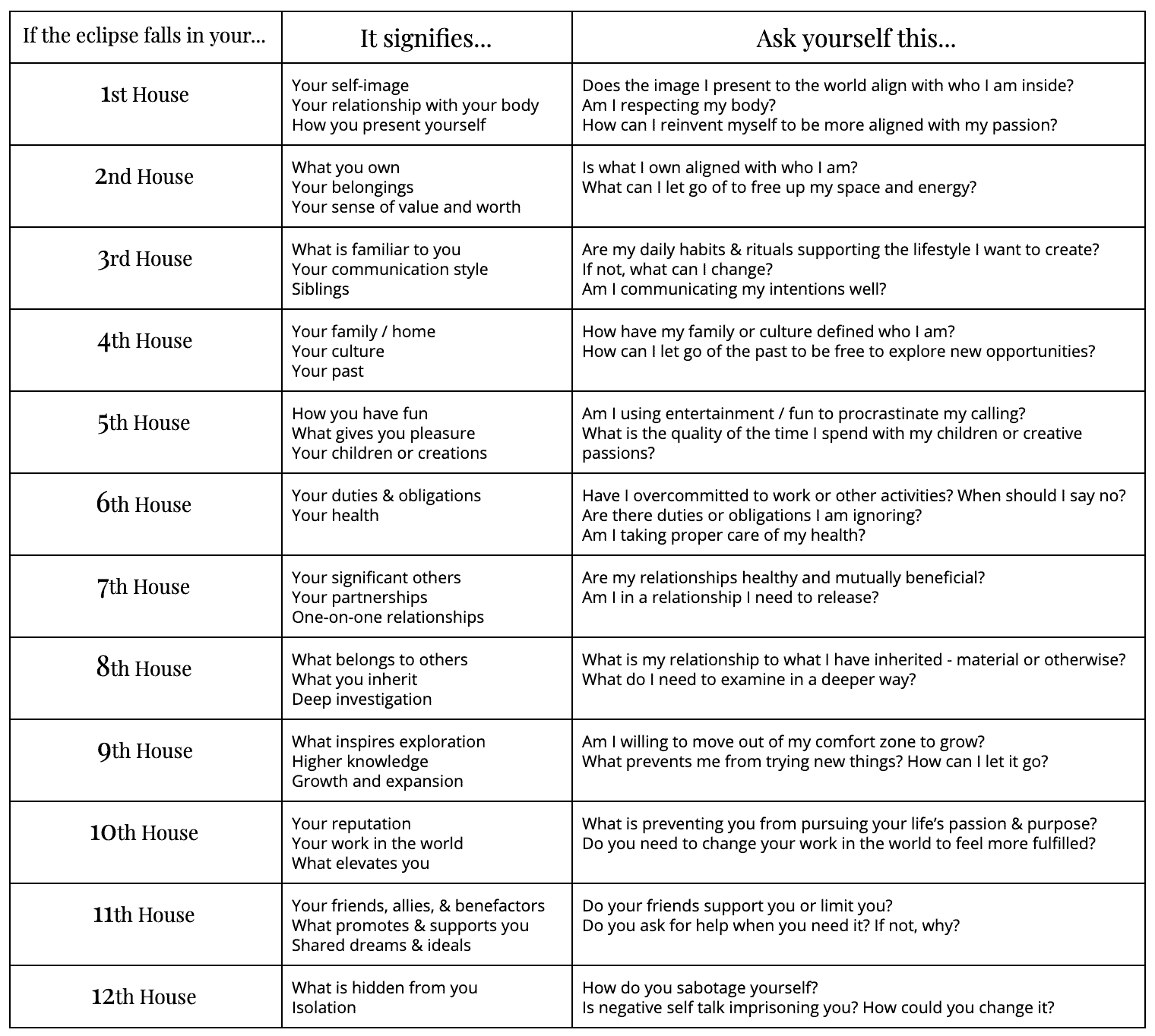 For more in-depth study of eclipses, check out our course Eclipse Mastery taught by the world’s 6 leading eclipse scholars!

Discover how to use karmic eclipse triggers to shift your outer reality and the collective paradigm for soul healing. You’ll also find out the transits, conjunctions, aspects, and eclipse points that support transformation in relation to your chart, so that you can better understand how eclipses will influence your soul journey and karmic connections. 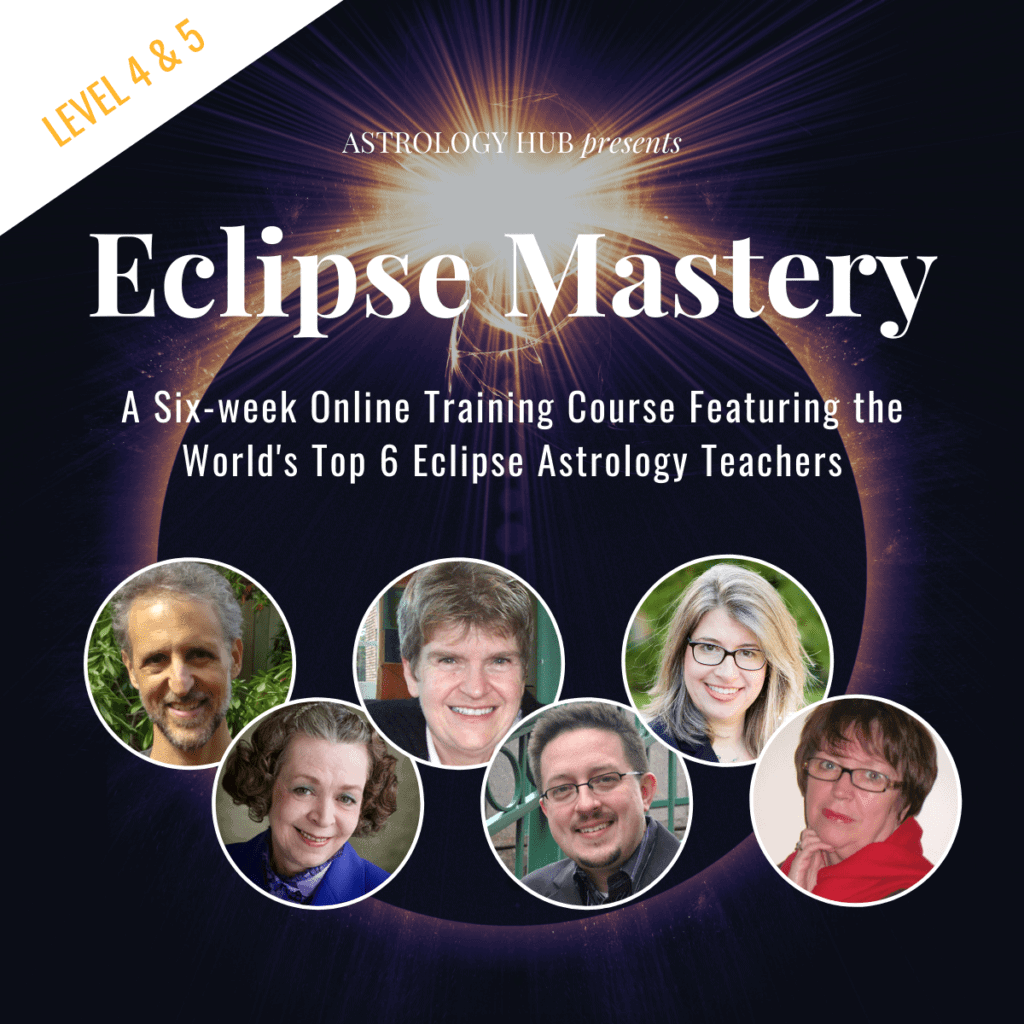